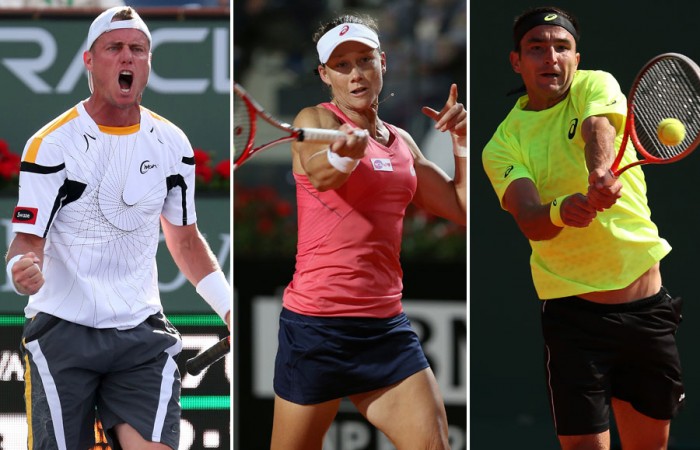 Sam Stosur has been dealt a tough French Open draw, landing in the same quarter as defending champion Maria Sharapova.

The Australian world No.9 has also been set an intriguing first-round clash against 42-year-old Japanese veteran Kamiko Date-Krumm.

Veteran Hewitt will meet 15th-seeded Frenchman Gilles Simon in the opening round and is in the same quarter of the draw as Roger Federer while Matosevic, winless in eight Grand Slams, was dealt a horror first-up assignment against world No.5 David Ferrer.

The returning Bernard Tomic was handed a more favourable opener against Romanian Victor Hanescu, ranked four places higher than him at No.55.

Stosur is targeting a run deep into the tournament despite her form and fitness worries in 2013.

But she will have to overcome being on the wrong end of a lop-sided record against world No.2 Sharapova if she is to reach the last four for the second straight year.

The Australian has won only two of 14 matches between the two, and both wins came on hard courts.

Stosur is also on the same side of the draw as world No.3 Victoria Azarenka but she’s avoided red-hot world No.1 Serena Williams, who she cannot meet until the final.

Stosur, 29, won’t be looking beyond her first round match though, with Date-Krumm defying her age to prove a menace on tour this year.

The 1995 French Open semifinalist produced some amazing results in the Australian summer and defeated Stosur in their only previous clash in Osaka in 2010.

“The first round is always a very dangerous round no matter who you are you’ve got to be absolutely switched on,” Stosur said.

“Everyone’s still finding their feet and there’s maybe a few extra nerves but I’ll certainly be focused for that one and hopefully get going and hopefully I’ll be there by the end.”

If Stosur wins her opener she’d face either American Lauren Davis or Frenchwoman Kristina Mladenovic in the second round with possible matches against No.18 seed Jelena Jankovic and seventh seed Petra Kvitova awaiting in the third and fourth rounds respectively.

Australian wildcard Ashleigh Barty has been handed an opening-round clash with Czech Lucie Hradecka and looks capable of making a surprise run in an open section of the draw.

Seven-time champion Rafael Nadal has been drawn to possibly face top-seeded Novak Djokovic in the French Open semi-finals, ensuring there will be no repeat of last year’s final.

Roger Federer could face Ferrer in the other semi.

The first round will be held over three days with the order of play yet to be determined.