No points, but praise for Barty

Ash Barty's Fed Cup debut didn't add any points to the scoreboard against the Czech Republic, but she earned sincere praise from team captain Alicia Molik. 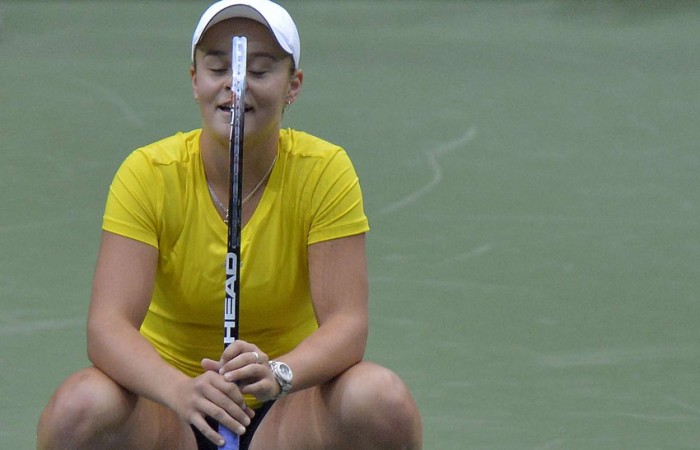 The 16-year-old on Sunday partnered Casey Dellacqua to be beaten 6-0 7-6(1) by the Czech world No.3 doubles combination of Andrea Hlavackova and Lucie Hradecka.

The champions had already stretched to an unassailable 3-0 lead in the best-of-five matches tie at the eastern Czech city of Ostrava and the dead-rubber doubles was a final chance for Australia notch a victory.

But it wasn’t to be.

The home side raced to quick first-set win, yet after re-grouping the Australians came back with an early break in the second set and stretched to a 3-1 lead.

The score levelled and was soon game-for-game until Hlavackova and Hradecka closed out the tiebreak.

“I think at times today the Czech team was left wondering what she was going to do because she can hit with spin and she can hit with a lot of power as well,” Molik said of the team newcomer, who is the youngest player to represent Australia in Fed Cup since Jelena Dokic in 1998.

Barty and Dellacqua, who turns 28 on Monday, reached the doubles final of the Australian Open in January and while the latter has featured in Fed Cup since 2006, Molik said Barty is an emerging talent.

“I think what helps Ash with her tennis is that she’s incredibly mentally mature,” Molik said.

“She plays tennis far beyond her years and she plays doubles like she’s been playing for the last 15 years.

“She has great instinct on the court, which you can only teach to a certain point. A lot players even in the top-20 ranks in doubles don’t have great doubles instincts and she does already.”