UPDATE. Australia will take a commanding 2-0 lead over Chinese Taipei into the second day of their Davis Cup tie after singles victories by Lleyton Hewitt and Matthew Ebden. 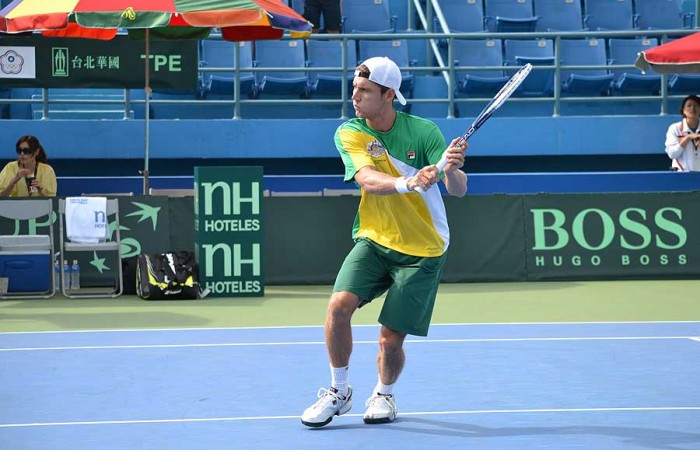 Australia will take a commanding 2-0 lead over Chinese Taipei into the second day of their Davis Cup tie after singles victories by Lleyton Hewitt and Matthew Ebden.

Hewitt gave Australia a 1-0 edge in the Asia-Oceania zonal match in Kaohsiung when he overpowered Chinese Taipei’s No.2 player Tsung-Hua Yang 6-4 6-4 6-4.

Ebden fought off some third set swinging from Ti Chen before scoring a straight sets triumph, 6-3 6-4 7-5.

Hewitt will team with Chris Guccione in the doubles rubber, hoping to wrap up the match on Saturday.

Australian captain Pat Rafter said he believed the Australians were always in control on the opening day.

“Our guys dealt with the situation a lot better than the Taiwanese boys,” Rafter said.

“They were a fraction tight.

“Lleyton had nothing really to gain out of this match, he had pressure on him and he played really well.

“Matty played really solidly and put up a good fight in the third set. If that had gone to four sets it would have been interesting to see how it unfolded.”

“I did what I needed to do and served well for most of the match,” Hewitt said.

“Yang’s got a good first serve – that’s the strongest part of his game and even though I had a lot break points in different areas he fought hard to hang in there.

“In the end I was happy to win in straight sets.”

Rafter said he was delighted with the way Ebden handled the third-set fightback from Chen who had taken a 4-2 lead before the Australian whittled back the deficit.

“He was upbeat and it was good to see him express some really positive emotions out there,” he said.

“He’s learning all the time and I think he played the big points really well today.”

Ebden said he was confident that if he remained patient and positive he would outlast Chen’s comeback.

“In the third set he came out swinging, he was just super loose, hitting all the lines but I knew if I hung tough and held my serve I’d get a chance to break,” Ebden said.

Hewitt said he and Guccione should be able to extend their unbeaten Cup record and seal the tie.

“My partner and I are very confident every time we play David Cup doubles together,” he said.

“We know each other extremely well, we know our strengths. We know it’s going to be a tough match but we’ve beaten the best.”