Aussie coach torn at the Open

Australian tennis coach Brent Larkham would ordinarily be thrilled that two of his charges had received wildcards into the season-opening Grand Slam at Melbourne Park. 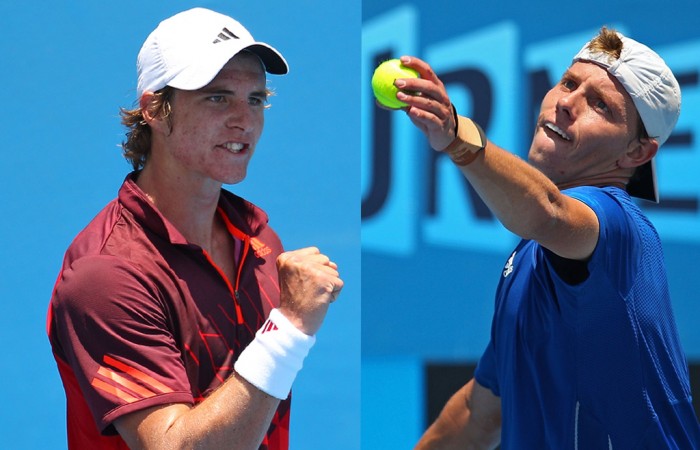 Australian tennis coach Brent Larkham would ordinarily be thrilled that two of his charges had received wildcards into the season-opening Grand Slam at Melbourne Park.

Instead, a torn Larkham said he wouldn’t dare be courtside on Tuesday when former junior Wimbledon runner-up Ben Mitchell takes on stablemate and fellow local James Duckworth in the opening round of the Australian Open.

“I’ve had three or four years with both of them. It’s just difficult for the kids,” Larkham said.

“I’ll definitely be staying in the change room. I’ll watch – but from a distance.

“It’s a huge occasion for both of them, so I’ve just got to keep the territory neutral.

“In some ways, it’s extremely disappointing that one of them will be out.

“But it’s also a great opportunity for one of them to go further in the tournament then just second round. They’ve got to be looking bigger than that.

“Whoever wins can’t just be satisfied with winning one match.”

Understandably, nor will Larkham have any direct input into the respective game plans of 20-year-old Mitchell and Duckworth, who turns 20 next Monday.

“Definitely not. Because having known the kids so well, I’m sure that I could influence the outcome one way or the other,” Larkham said.

“Until the draw came out, I was on the court with them daily.

“But as soon as the draw came out, they were off doing what they need to do.

“Luckily, they weren’t staying in the same room this week. Sometimes they do, but not this week.

“So it’s up to them now as to how to best handle the occasion.”

Mitchell and Duckworth aren’t completely on their own; with Larkham moving to Brisbane, Chris Guccione’s former mentor Anthony Lane is guiding Duckworth and AIS coach Ben Mathias is working with Mitchell.

Not surprisingly, Larkham is refusing to tip a winner either, preferring to give as little away as possible.

“Both had similar pathways in their development and both are at a similar level from a standard ability.”

Duckworth, who reached the second round on his main-draw debut last year, before falling in four sets to Serbian world No.9 Janko Tipsarevic, is ranked No.223 in the world.