Jarmila bows out in Hobart

Mercurial wildcard Jarmila Gajdosova bowed out of the Hobart International quarterfinals on Thursday. 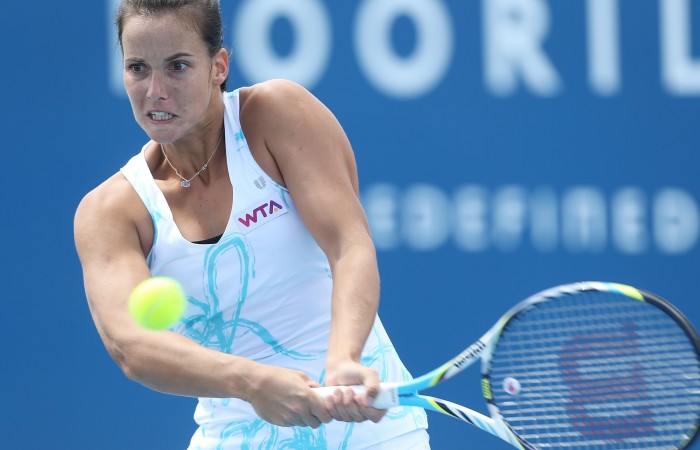 Mercurial wildcard Jarmila Gajdosova bowed out of the Hobart International quarterfinals on Thursday.

The 2011 Hobart champion struggled in the blustery conditions as Russian Elena Vesnina handled Gajdosova’s power game with aplomb to prevail 6-3 6-2.

After cruising through to the final eight with two straight sets wins, Gajdosova never seriously threatened the world No.68’s serve and was punished for serving at just 40 percent herself.

The Victorian suffered early breaks in both sets and struggled to find her rhythm, or hold her nerve, in the pressure rallies.

“She was more solid than me in the tough conditions,” the 25-year-old admitted.

Vesnina revealed she used the wind to her advantage in the baseline battle to progress to a semifinal against Sloane Stephens who outlasted fellow American Lauren Davis 6-3 4-6 7-5.

“Of course I had to be smart and in the wind you have to use it like a weapon,” she said.

Despite the loss, Gajdosova felt her confidence was growing again as she aims to break her duck at the Australian Open.

She has never progressed past the first round at Melbourne Park but has taken heart by her 3-2 record this year, including a first-round upset of Italian world No.16 Roberta Vinci in Brisbane.

“I thought it’s been a pretty positive step forward,” said Gajdosova, who’ll also play as a wildcard in Melbourne.

“I won two matches against two good players [in Hobart] so it was a good start.”

Defending champion Mona Barthel also won through to the semifinals with a 6-3 6-3 victory over Bulgarian Tsvetana Pironkova 6-3 6-3.