Now officially an Australian citizen, Daria Gavrilova will represent her adopted nation at the Hopman Cup before focusing on a strong Grand Slam showing at Melbourne Park. 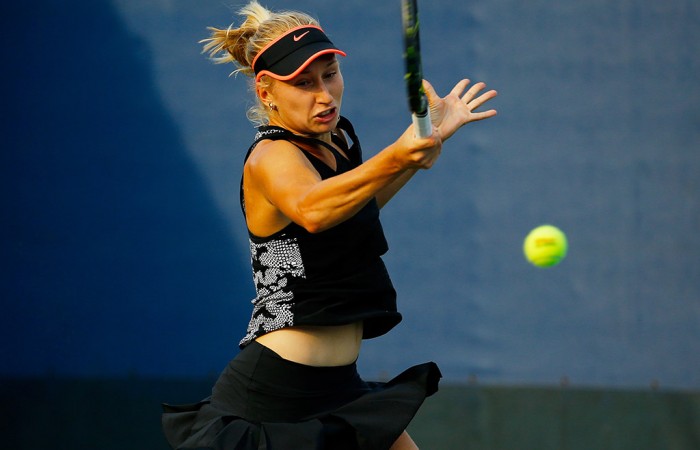 She’s finally got her hands on an Australian passport, and now Daria Gavrilova has set her sights on becoming a force in next year’s Grand Slams.

Gavrilova announced herself as a future star in 2015 by beating former world No.1s Maria Sharapova and Ana Ivanovic as well as top 10 player Lucie Safarova.

The 21-year-old’s breakthrough season on tour took her from 233rd up to 36th in the world rankings, but her performances at the majors left a lot to be desired.

Gavrilova fell in the first round at the Australian Open, Wimbledon and US Open, with her best result an injury-enforced second-round retirement at Roland Garros.

The Russian-born right-hander is aiming to improve her Grand Slam performances in 2016.

“Improving my ranking is going to be a big goal for me. But the grand slams are the main goal for me, getting my results better,” Gavrilova said.

“I think I was just getting a bit overwhelmed.

“For every tennis player, a grand slam is something different, and everyone wants to win it. It was my first year playing them all. I think I was just a bit inexperienced.”

Gavrilova gets her first taste of representing Australia in a team event when she links up with Nick Kyrgios in the 3-9January Hopman Cup at Perth Arena.

It’s an experience she’s been looking forward to for a long time.

After becoming a permanent resident midway through last year, Gavrilova finally received the passport she craved a few weeks ago.

“When I had the ceremony, I had butterflies,” Gavrilova said.

“I was so proud. I’m pretty happy.

“I’ll get a bit nervous of course (playing for Australia). I’m a human being. I’m just really looking forward to it. Seeing the (Australian) flags – I just can’t wait.”

For the first time in Hopman Cup history, Australia will field two teams. Kyrgios and Gavrilova will form Australia Green, with Lleyton Hewitt and Jarmila Gajdosova to front up as Australia Gold.

Gavrilova will take on Germany’s Sabine Lisicki in the tournament-opener on Sunday, with Kyrgios to face off against Alexander Zverev.

And as for teaming with tennis bad boy Kyrgios? Gavrilova can’t wait.

“I’ve known him for a long time now. We played juniors together, so we’re pretty good friends.”

World No.1 Serena Williams and two-time major winner Andy Murray are other drawcards at the mixed teams event.