Lleyton Hewitt wants to push himself to the limit in his final month in tennis and believes mentee Nick Kyrgios is destined for the top 10. 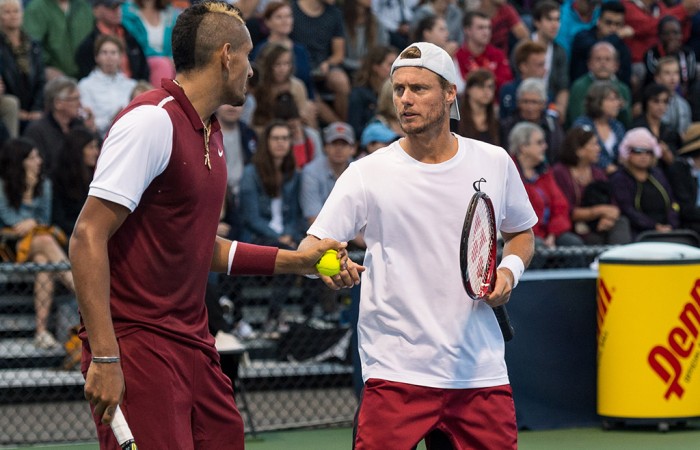 Retiring great Lleyton Hewitt has vowed to put everything on the line during his final month in the game, and he’s confident it won’t be long before compatriot Nick Kyrgios cracks the world’s top 10.

Hewitt will end his glittering 18-year career after this month’s Australian Open.

But first, he’ll line up for Australia Gold at the Hopman Cup, with Kyrgios representing Australia Green.

The pair have forged a strong friendship over recent years, with Hewitt taking up a mentoring role with Kyrgios.

Hewitt has full faith that Kyrgios is on the path towards greatness, and he’s backing the world No.30 to make significant progress in 2016.

When asked whether Kyrgios had what it takes to become a top-10 player, Hewitt replied: “He certainly can.

“He can match it with the best guys in the world. On his day he’s capable of beating anyone.

“That’s the kind of power and talent he has out there. It’s just a matter of doing that week in, week out.

“He likes playing on the biggest stages and the biggest tournaments. It’s big for Davis Cup and Grand Slams.

“I feel like Nick and I have a really good respect for each other. I know his game pretty well.

“He’s got a great platform to build on for the next three to five years.”

While most players ease up during the final stages of their career, Hewitt has done the opposite.

The two-time major winner has undergone a gruelling summer training program to ensure his tennis farewell is a memorable one.

“Even though I’ve only got a month to go on the playing circuit, I still want to get the most out of myself and push myself to the limit,” Hewitt said.

“I’ve always prided myself on going out there and giving it 100 per cent, and I feel like I’ve done that again this year.”

Hewitt will team with world No.105 Jarmila Gajdosova at the Hopman Cup, with the pair starting their campaign against Czech duo Karolina Pliskova and Jiri Vesely on Sunday night.

Hewitt will also take on Ukraine’s Alexandr Dolgopolov and American Jack Sock during the tournament.

Australia’s only Hopman Cup title came back in 1999, when Mark Philippoussis and Jelena Dokic took the crown.

Hewitt has appeared at the mixed-teams event seven times already, but his greatest chance of landing the title – in 2002 – was thwarted when he contracted chicken pox.

He was also a losing finalist in 2003 when beaten 3-0 by American duo James Blake and Serena Williams.