Fans will get their chance to see many home-grown tennis stars in action at several Australian Open Series events. But which Aussies are playing, and where? 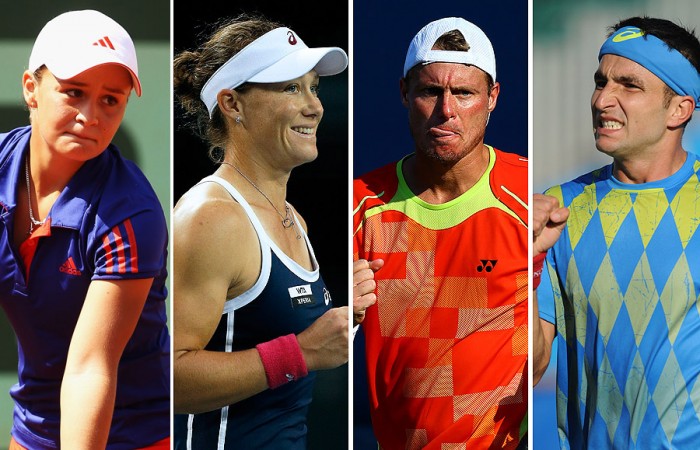 The beauty of having several events staged Down Under in the lead up to the Australian Open is that local fans enjoy the chance to witness some of the best home-grown talent in action.

While many eyes will undoubtedly be fixed on Melbourne Park during Australian Open 2013, the two weeks prior to this event is jam-packed full of tennis. Players arrive in Australia around during the New Year period to fine-tuning their games at Australian Open Series events, getting acclimatised to the hot summer conditions and Plexicushion courts as well as gaining valuable match practice before an assault on the year’s first Grand Slam event.

Thanks to wildcards and the crowd-pulling power of Aussie tennis players in their home country, many local competitors will be in action. At these lead-in events staged all over the country, fans will have the opportunity to witness up-and-coming Aussie stars, battlers looking to make the most of rare tour-level opportunities, old favourites going for a final shot at hometown glory, and of course, the current cream of the Australian tennis crop.

So which Aussies will fans get to see, and where will they playing?

Australia is one of the eight nations competing at the ITF’s mixed teams event, and will be ably represented by a pair of the most promising young players our country has produced in some time.

World No.52 Bernard Tomic, the youngest player in the top 100 at age 20, will be joined by prodigious 16-year-old Ashleigh Barty, and will take on the might of nations like Serbia (Novak Djokovic and Ana Ivanovic), the United States (John Isner and Venus Williams) and Germany (Tommy Haas and Andrea Petkovic).

“It will be an incredible experience to compete against some of the world’s best players and will be an amazing start to the summer for me,” Barty said.

“I’ve learnt so much this year and I think my game has matured a lot … Hopman Cup is going to be a real opportunity to play against the top players. I can’t wait.”

The rapidly-growing event on the professional tennis calendar has drawn an impressive cast of local stars, who along with a stellar international field will light up the Queensland Tennis Centre in Brisbane.

Leading the way will be Aussie No.1 Sam Stosur, who will kick of her 2013 season in the feature night session match at Pat Rafter Arena on New Year’s Eve. Stosur is very much the local – born and raised just down the road on the Gold Coast – and is thrilled to be back playing in front of her loyal fans.

“It’s always fun to play at home. You don’t get many opportunities to play in your home country and the state that you’ve grown up in,” Stosur said.

“It is a good week and a great atmosphere playing at Pat Rafter Arena … the bigger the tournament has got the bigger the names that want to come out and play. What better preparation than playing the best players in the world straight up?”

Joining Stosur will be top-ranked Aussie male Marinko Matosevic, and a trio of wildcards – Lleyton Hewitt, Matt Ebden and Jarmila Gajdosova – who have enthusiastically accepted the chance to compete against the world’s best.

“It’s a tournament I really love … Brisbane is one of the first tournaments I got breakthroughs at. I really like the conditions there and the city … Brisbane is definitely one of my favourite events during the year,” Ebden said.

Heading to the Sydney Olympic Tennis Centre will be a typically world-class field as players get one final competitive hit-out the week before heading to Melbourne Park.

Stosur will continue her preparation in the city she now calls home, one of the highest-ranked women taking to Ken Rosewall Arena in a field that contains seven of the WTA’s top 10.

“Every year the tournament is tough. The cut off is around 25 in the world so you really jump straight in the deep end there,” Stosur said of how the tournament assists in her Australian Open campaign.

On the men’s side, Australia’s top-ranked duo of Matosevic (world No.49) and Tomic (No.52) will also feature as part of the action in the harbour city.