Ben Mitchell and Ashleigh Barty are the 2012 Latrobe City MSS Security Tennis International champions after taking out the men’s and women’s singles titles. 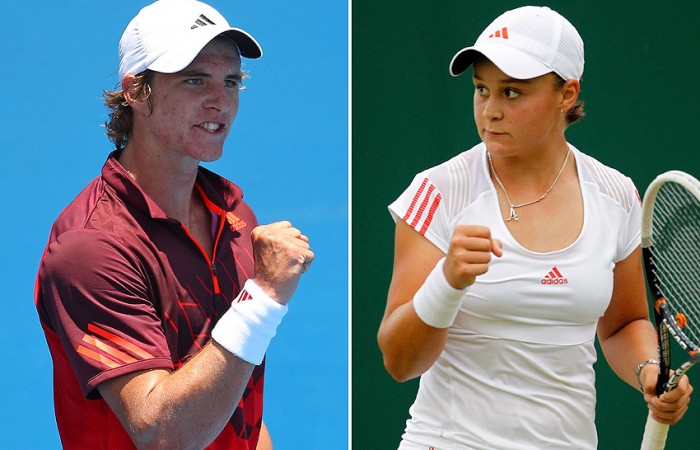 “It’s always good to come back and defend the title,” said Mitchell after his match.

“I was up 6-3 2-1 with a break and I hadn’t lost a set all tournament and was hoping not too but Luke really stepped it up and gave it all he had in the second.

“I really made a conscious effort to come out and start the third set quite aggressively, especially on my returns and serve. It paid off, I got to a 4-1 double break lead and that’s where I won the match.”

The win is Mitchell’s first ITF Futures title for 2012 and his fifth in his career to date.

Saville wasn’t without big wins either, taking out the No.3 seed Jose Statham (NZL) in the quarterfinals before defeating the No.2 seed Matt Reid (Dural, NSW) in the following round for a berth in the final.

“I got off to a pretty good start in both sets, going up 4-0. Arina put a bit of fight back in both sets but I was able to hold my nerve a little bit and get the win,” said Barty.

At a career-high ranking of No.217, Barty’s ranking is only expected to climb after her latest win, with her win-loss record currently at 28-6 for the year.

Barty’s week was challenging but the right-hander came through without losing a set after she took out the No. 6 seed Alize Lim of France before defeating No.3 seed Daria Gavrilova of Russia.

“I’ve had some tough matches, especially my semi that was some of the best tennis I’ve played ever so was happy to get through that one,” she said.

Barty and partner Sally Peers (Glen Waverley, Vic) couldn’t capitalise on a match point to secure a third title when they went down to Rodionova and former world No. 1 doubles player Cara Black from Zimbabwe in the women’s doubles final 2-6 7-6(4) [10-8].

The Australian Pro Tour will now travel north to Bendigo for the William Loud Bendigo International (27 October-4 November), the last tournament of the 2012 calendar.