Australian champions Lleyton Hewitt and Sam Stosur will aim to keep progressing at the US Open when they take to Louis Armstrong Stadium on Day 7. 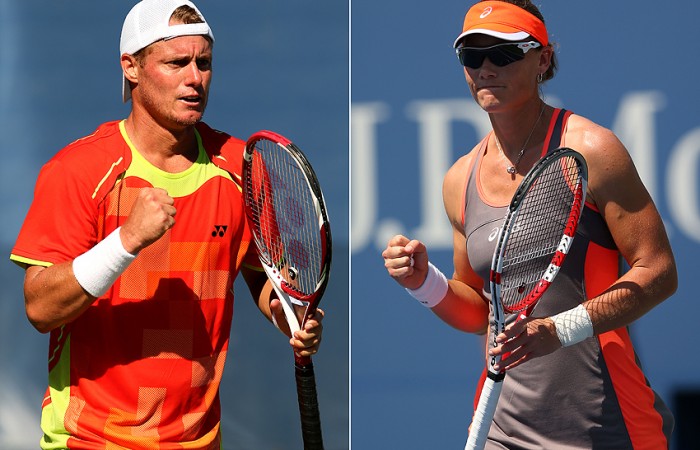 Lleyton Hewitt and Sam Stosur will look to keep their 2012 US Open campaigns on track when they play their respective matches on Louis Armstrong Stadium on Sunday.

Hewitt will kick off proceedings on Flushing Meadows’ second-biggest court when he takes on Spanish No.4 seed David Ferrer, who represents a tough third round assignment for the 31-year-old wildcard.

Yet Hewitt says he’s looking forward to taking on the 2007 US Open semifinalist, having gained in confidence after a gritty five-set win over Gilles Muller of Luxembourg.

Stosur will follow Hewitt onto Armstrong later in the day, playing her fourth round match against British upstart Laura Robson.

The 18-year-old Robson has eliminated two of the biggest names in the women’s draw in Kim Clijsters and Li Na, and will be looking to make it a three-peat against the defending US Open champion.

However Stosur, who has come through all her matches in New York in straight sets thus far, believes her third round match against left-hander Varvara Lepchenko has equipped her well to take on the British southpaw.

> read Stosur’s thoughts ahead of her clash with Robson

You can keep abreast of Hewitt and Stosur’s progress, as well as the other Aussies in action on Sunday, by following the @TennisAustralia handle on Twitter.

Those other Australians include Marinko Matosevic, who with American partner Jesse Levine will look to continue his run through the men’s doubles draw, and Anastasia Rodionova, who will play her second round match in mixed doubles.

Jordan Thompson will also represent the green-and-gold in junior play, with the junior boys’ and girls’ events commencing on Sunday.

There’ll also be plenty of media and fan interest in several of the other players scheduled, including Novak Djokovic, Victoria Azarenka, home favourite Andy Roddick and a stellar women’s night match between Maria Sharapova and Nadia Petrova.

Tune into Fox Sports 3HD’s live coverage of Day 7 of the US Open for all the Aussie action and more from Flushing Meadows, beginning at 1am AEST on Monday. For more info, see our TV Guide.