When Lleyton Hewitt entered into the fifth set of his match against Gilles Muller on a sweltering Friday at Flushing Meadows, an extraordinary statistic emerged. 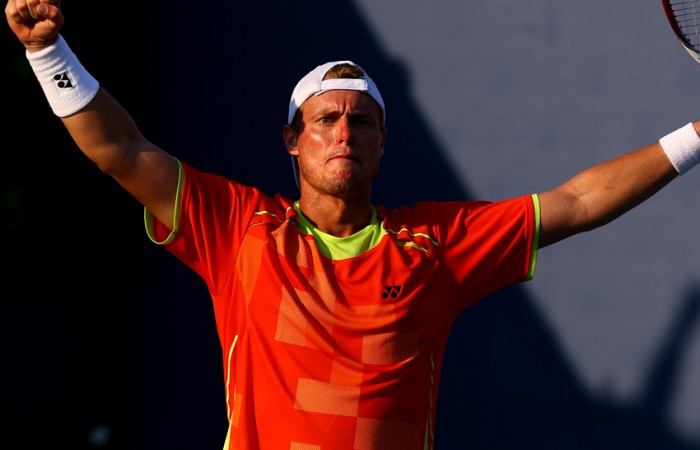 When Lleyton Hewitt entered into the fifth set of his second round match against Gilles Muller on a sweltering Friday at Flushing Meadows, an extraordinary statistic emerged.

The Aussie was now in the midst of the 49th five-set match of his career, putting him equal-second on the all-time list of five-set matches contested – at least since ATP records began in 1973 – behind Romanian Ilie Nastase, who finished with 51.

Neither of the players Hewitt tied on Friday – Andre Agassi and Jan Kodes – can match his win-loss record in five-setters. And the 31-year-old moved even further ahead of his generation of contemporaries still competing on the men’s circuit – including Roger Federer, Andy Roddick, David Nalbandian, James Blake and Juan Carlos Ferrero – in terms of five-set matches played, and won.

“It’s something I don’t really think about. Obviously I went through one stage in my career where I won a lot (of five-setters) in a row. I guess at that time you think about it,” Hewitt said.

“But today it was more just playing in the moment and not worrying. I knew I trained extremely hard to get in as good a shape as possible. You still have little doubts, though, because I haven’t played an lot of four and five-set matches in the last couple years.

“I trained as hard as anyone coming back from surgery. There’s that mindset in the back of your mind when you’re out there, going into the fifth set, that maybe you’re due.”

However, the South Australian did admit that his towering five-set record provided a confidence boost when his match against Muller went into the decider.

“Definitely. The more you win five-set matches, when the match goes the distance, I think your opponents know that, as well.”

There’s little doubt that Muller was aware of Hewitt’s reputation as being at his toughest when the chips are down. At one stage of the match, Hewitt trailed by a set, 5-3 and 0-30 on serve, before launching one of the more dramatic comebacks of his already-storied career.

The match-up with the left-hander from Luxembourg was always going to be tricky. For a player who could be described as a journeyman – he’s currently ranked No.53 and has never before cracked the top 40 – he has a fabulous US Open record.

Playing for the first time at Flushing Meadows, he stunned No.4 Andy Roddick in the first round in 2005, and reached the quarterfinals in 2008 as a qualifier. He backed that up with a run to the fourth round in 2011.

Hewitt was forced to survive 35 aces and a monstrous tally of 95 winners before finally subduing Muller, but felt that he could have finished the job even earlier on a packed Court 11, where the support for the Aussie was strong.

“Throughout the third set I felt I was the better player. I was getting more of the chances, but I wasn’t able to close it out when I got those break-point chances,” he said.

“To lose that third set in another breaker was frustrating. I had to dig deep to turn it around again.”

The win sets up a third round match with fourth seed David Ferrer, who has progressed through the draw without the loss of a set.

Despite suffering through the pain of lacerating toenails in the Muller match, which “filled the sock up with a little bit of blood” but would be treatable with some padding and taping, Hewitt said that his body had come through the rigours of the four-and-a-half hour battle well, and that he was looking forward to having a crack at the gritty Spaniard.

“I’ve got to take it to him, absolutely. But I’ve got to pick the right ball … If I go out there trying to press too much, then that plays into his hands, as well, because he’s such a good counter puncher and retriever,” Hewitt said.

But perhaps not as tough over five sets, it seems, as Hewitt himself.