After facing a raft of left-handers in the past few weeks, as well as in her previous match, Sam Stosur feels ready for the challenge of taking on Laura Robson. 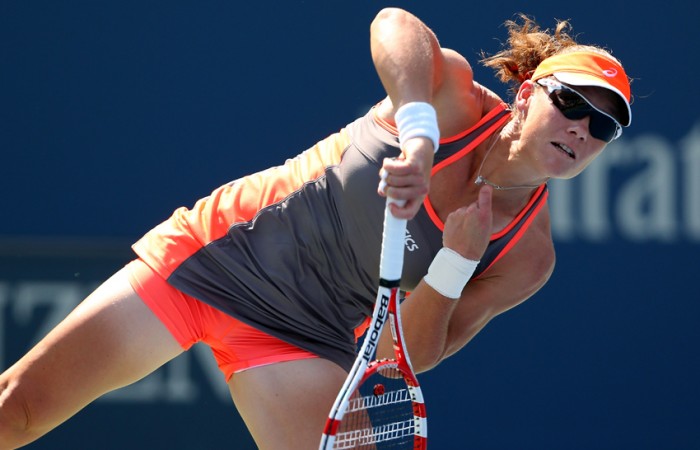 For someone who supposedly struggles with left-handers, Sam Stosur has been doing a fairly good job recently of handling the challenge they present.

Popular opinion in tennis circles is that Stosur can sometimes come unstuck against the southpaws of the women’s tour due to the fact that their forehands are directed into the Aussie’s backhand wing, less of a potent shot than her famed forehand and giving her less of an opportunity to use this weapon.

But that theory didn’t hold on Friday at the US Open, with Stosur defeating left-handed American Varvara Lepchenko in straight sets on Arthur Ashe stadium. It was a tough affair, but after Stosur gritted her way through a tight opening set, it was one-way traffic for the rest of the match.

She’s now won 14 of her last 15 matches at Flushing Meadows, including her last 10 on the trot.

“I think as the match went on I probably became a little more comfortable, got used to her spin,” the world No.7 reflected.

Going into the Lepchenko match, Stosur discussed the fact that she’d faced left-handers Lucie Safarova and Ekaterina Makarova in US Open tune-up events, something she hoped would prepare her for the somewhat unconventional and unorthodox balls that lefties can dish-up.

She even managed to score a hit with Petra Kvitova – the world’s highest-ranked left-hander – ahead of her third round match.

After going on to defeat Lepchenko, the news came through that Stosur would face yet another left-hander in the form of Laura Robson, who sensationally upset the red-hot Li Na shortly after Stosur wrapped up her win. The Brit has become the giant-killer of this year’s US Open, having eliminated Kim Clijsters in the previous round.

The Australian said that facing Lepchenko on Friday would hopefully prepare her well for her match against the 2008 junior Wimbledon champion.

“I think that’s probably a good thing. You never know when you’re going to run into them (lefties). The more times you play against that kind of spin, maybe the easier it gets,” she said.

“I have never played Laura before. She is obviously full of confidence and had two very, very good wins. Definitely can’t go into that match (taking it) lightly. I have to go out there and be on my game and be ready to play some good tennis.”

Apart from a practice hit with the 18-year-old on grass prior to Wimbledon in 2011, Stosur said she didn’t know much about Robson’s game, save for the fact the Brit had been tagged as a promising prospect since her junior Grand Slam-winning days. The pair haven’t played at many of the same tour stops, with Robson generally contesting the lower-level WTA International events as well as a handful of ITF tournaments in 2012.

Stosur said that she would have to do her homework and discuss the upcoming Robson battle with coach Dave Taylor, but would mainly be concentrating on what was happening on her own side of the net.

“I’ve got to focus on my game. Maybe there are a few things that you can pick up (about Robson) but at the end of the day I’ve got to do what I do well,” she said.

What Stosur is doing particular well at the moment is serving. The Aussie slammed five aces against Lepchenko – taking her tournament tally to 20, second only to Nadia Petrova – as well as landing 72 per cent of her first serves. When she did that, she was winning almost nine of every 10 points.

Having played on Ashe twice and Armstrong once so far here at US Open 2012 – in addition to big-experience on showcourts elsewhere in the world – Stosur believes she’s well-acclimatised as the tournament moves into the second week, during which the majority of matches are contested in the large arenas.

“I’m feeling good. I feel like I’ve done everything I need to get to this position. I thought I played quite well (against Lepchenko). I have served very well. I’m happy with where I’m at,” she said.

“Of course you always want to improve things. But so far, so good.”