UPDATE 12:40pm: Casey Dellacqua and Anastasia Rodionova have reached the US Open second round, while Jarmila Gajdosova and Olivia Rogowska fell. 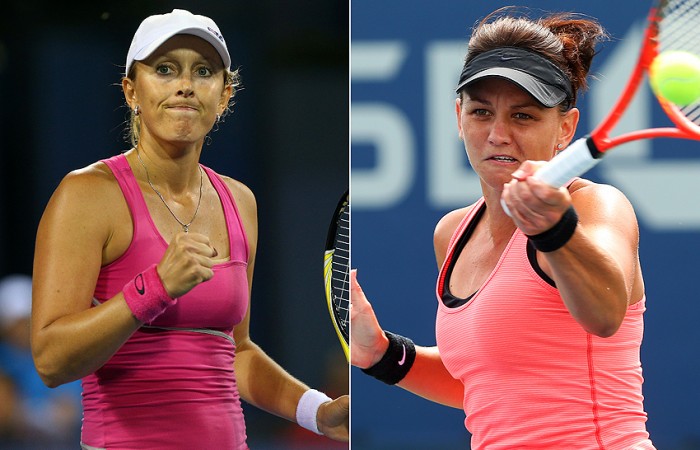 Casey Dellacqua has kept up her good form in the United States, brushing aside Lesia Tsurenko of Ukraine in straight sets in the first round of the US Open.

She was joined in the second round by Anastasia Rodionova, who defeated American wildcard Julia Cohen for the loss of just three games on Monday night at Flushing Meadows.

Dellacqua beat the qualifier 6-2 6-3 in one hour and nine minutes to reach the second round in New York for just the second time in her career.

“I started a little bit nervous because I knew it was a winnable match and I had been playing well, so I didn’t want to go out there and get overwhelmed or put too much pressure on myself,” Dellacqua said.

“I had a really set game plan, I knew her game quite well – a couple of other girls had given me feedback on her game – so I knew what I had to do and had to go out there and execute.

“I didn’t over-play or do anything too fancy. I played solid, did the basics quite well and, yeah, was happy to close it out before the rain came.”

Dellacqua’s performance in Dallas saw her return to the top 100 this week, at No.92.

Meanwhile, Rodionova is on her own quest to return to the game’s top 100, continuing her rich vein of form.

The world No.161, who came through three rounds of qualifying last week for the loss of just 11 games, dismissed Cohen 6-3 6-0 in one hour and seven minutes.

Having concentrated on doubles in the lead-up to the London Olympics, Rodionova said her stunning improvement had come thanks to her re-dedicated focus to the singles game.

“I think I’ve been moving on the court really well (recently), just playing my game, being aggressive from the baseline and finishing the point at the net like I always do. All those things were a bit off for some tournaments, but now I actually had time to work on that, and I feel good on the court,” she explained.

The Victorian said that grooving her game in qualifying – plus the rest period she enjoyed between qualifying and the main draw – had helped her feel prepared for her match with Cohen.

“I had a couple of good wins in qualifying, had three good matches and got used to the conditions and the courts and the balls. I felt good on the court last week, and still feeling good now,” she said.

There was less to celebrate for Aussie No.3 Jarmila Gajdosova, who put in a competitive display but ultimately lost to Nadia Petrova.

It was a tough draw for Gajdosova – Petrova is the 19th seed – and she made it even tougher for herself by dishing up 10 double faults.