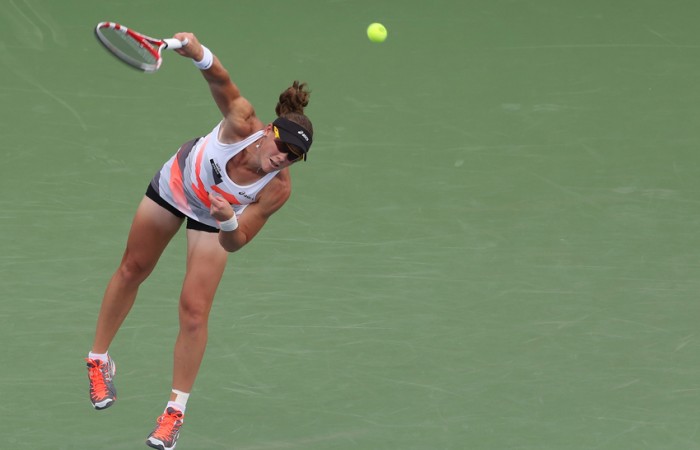 Sam Stosur has cruised into the quarterfinals of the ATP/WTA Masters event in Cincinnati thanks to a straight set win over Ekaterina Makarova.

Yet compatriot Bernard Tomic was not so fortunate, bundled out of the tournament by top seed Roger Federer.

Tomic fell 6-2 6-4 in just over an hour, seeing his record against the Swiss great drop to 0-3 in the process.

Despite both producing seven aces and one double fault, Federer’s serve was far more effective against the 19-year-old Australian.

He won 82 points on her first delivery, compared to Tomic’s 65, and never once faced a break point during the match.

Federer will meet 10th seed Mardy Fish in the quarterfinals.

Stosur’s next opponent at the same stage of the tournament will be Venus Williams, who thrashed FrenchOpen finalist Sara Errani 6-3 6-0 in the third round.

Williams beat Stosur in their last encounter, in the third round of the Rome Masters event in May.

But Stosur’s belief and form are both clearly on the rise. After surviving a titanic struggle in the second round against Spaniard Anabel Medina Garrigues, she looked far sharper against the Russian.

Her 6-1 6-3 victory came in just one hour and 10 minutes against Makarova, a dangerous lefty and the type of player that Stosur has historically struggled with.

The Australian slammed six aces to two double faults and won 89 points on her first serve, serving particularly well under pressure to save the only two break points she faced.