The Smith family have made history in the Sydney Badge Tennis Competition, part of.the first team to play and win the Premier Division with four family members. 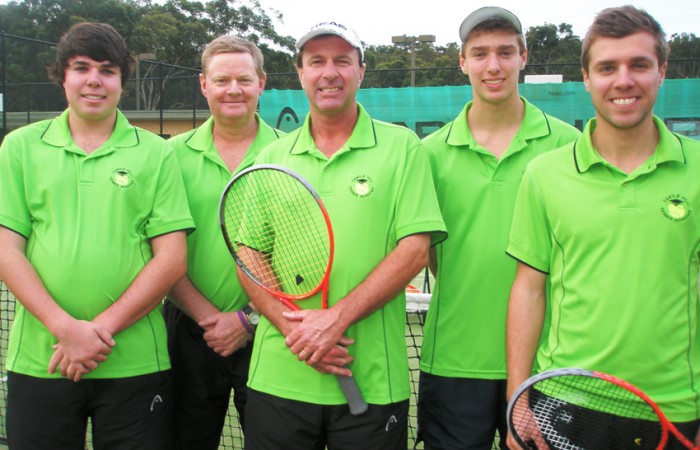 On a recent July afternoon in Castle Hill, a Hills District tennis family made history by triumphing in the Premier League Division of the Sydney Badge Tennis Competition, Sydney’s elite grassroots tennis competition.

Their convincing five-sets-to-one win over Sydney Lawn made them the first team in competition history to have played and won with four members of the same family.

The team made their debut into Badge Tennis in 2011, in that season losing in the semifinals to Sydney Lawn Tennis Club. It seemed their 2011 experience paid dividends, the team finishing as minor premiers in 2012 before exacting revenge in the grand final for their 2011 defeat.

Neil Smith is head coach and owner of Castle Hill Tennis Academy, which has operated for 20 years. He has coached for 24 years, both as a full time Advanced Level Coach and currently as a Tennis Australia Talent Development Coach. He is especially passionate about the development of junior talent, nurturing individuals through pathways including coaching, competitions, squads and tournaments.

Those juniors include his sons, who came through the Castle Hill Tennis Academy. Blake is the eldest (now 21 years old), followed by Cameron, 19, and 15-year-old Jordan.

Smith coached all three to a very high level through their junior careers, with each achieving high state and national rankings. Jordan is currently one of the top-ranked 16-and-under Australian juniors, with career highlights including a win at the Optus 14 National Claycourt Championships in 2011 and a semifinal finish in April 2012’s Gallipoli Youth Tennis Cup. He is currently No.767 in the ITF world junior rankings, with aspirations to one day be a professional player.

While he may not be a Smith, Kilborn, the fifth member of the wining Hills District team, has enjoyed a long standing friendship with the family, and is also godfather to Blake. As well as currently coaching at the Castle Hill Tennis Academy, Kilborn has partnered with Neil Smith to represent Australia in 35+ Seniors Tennis events, and together they hold state and national titles in doubles.

The Smiths believe tennis is a game for the entire family, and their continued on-court success and closeness off it is testament to this.

Any families – or any player for that matter – inspired by their recent success story can soon take part in the same competition, with the Hills District Tennis Association’s new spring competitions commencing in September 2012. To find out more, visit www.hdta.org.au.

To find out more about coaching, competitions or tournaments in metropolitan Sydney or regional New South Wales, head to tennis.com.au/nsw.