Australian tennis legend John Fitzgerald was in the Apple Isle last week to visit a handful of schools involved in the pilot of the MLC Tennis Hot Shots National School Partnership Program. 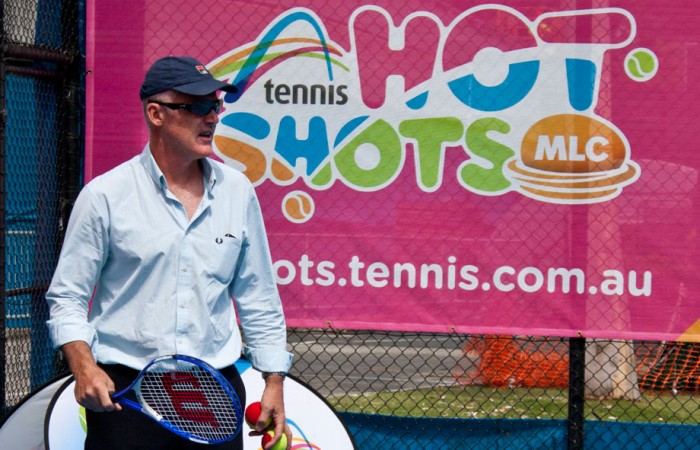 Australian tennis legend John Fitzgerald was in the Apple Isle last week to visit a handful of schools involved in the pilot of the MLC Tennis Hot Shots National School Partnership Program.

The program aims to build partnerships between schools, coaches and clubs to get more kids playing tennis more often and over the past 12 months has been trialled at 22 schools around Australia.

Fitzgerald paid a visit to two schools, Our Lady of Lourdes in Devonport and Riverside Primary School in Launceston who are the Tasmanian participants.

“It’s a fantastic opportunity to have John visit the school,” Clynton Scharvi, Principal of Our Lady of Lourdes said.

“The kids have been very receptive to the program, with the students eager to get out there and play.

“Our local CTO Sally Jackson has been a great resource and has put us in touch with the Devonport Tennis Club and other key contacts to help embed [MLC Tennis] Hot Shots as part of our sports curriculum.”

Schools like these are perfect examples to show how the program is really catching on Fitzgerald says and believes it’s on track to build a substantial base of players in Australia.

“We’ve had 275,000 kids from around the country have a Hot Shots experience over the last year. And we are already seeing kids running straight to the gym during recess and lunch to get first dibs on the equipment,” Fitzgerald said.

“To compete internationally is not an easy thing, we need more numbers to come in at the base level and this program will start to feed this process.”

Fitzgerald also noted the program’s soft ball concept has helped get more kids on court and try the sport.

“Kids want instant gratification really these days so rather than having a fully pressurised ball that’s very difficult for a young person to control, we’ve introduced this larger in diameter ball.

“It’s softer and gives them a chance to play and leaves them with a smile on their face the first time they pick up a racquet.

“They now have control or some form of control with the ball. They contact a lot easier and it just gives them heart to want to play again,” Fitzgerald added.

During his trip to Tasmania, Fitzgerald also introduced the kids’ starter program to St Michael’s Collegiate School in Hobart.