Federer back to No.1 after Wimbledon win 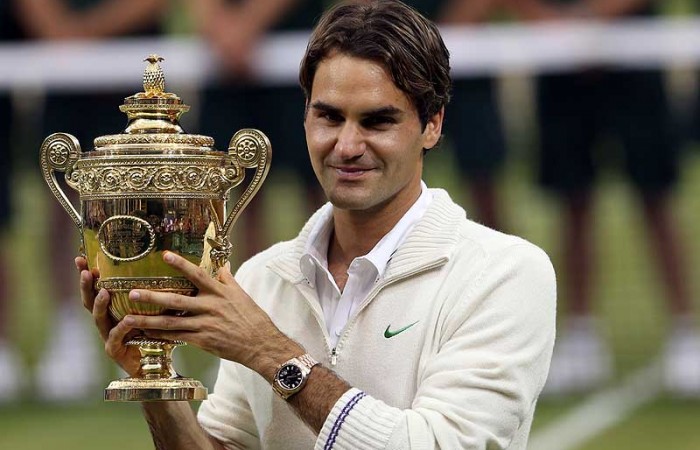 Ending all arguments, Roger Federer has soared back to world No.1 after breaking British hearts with an absorbing and captivating victory over Andy Murray in Wimbledon’s much-anticipated final.

Forget tennis, Federer staked a claim as possibly the greatest athlete in history with his spellbinding 4-6 7-5 6-3 6-4 triumph that secured the phenomenal Swiss a record-equalling seventh title at the All England Club.

While Britain’s agonising 76-year wait for another men’s grand slam singles champion goes on, Federer’s sweetest success is the strawberries and cream on his incredible career.

Playing in the fierce era of Novak Djokovic and Rafael Nadal, and with his grand rivals at their peak, Federer’s unmatched 17th major and return to the top of the rankings one month shy of his 31st birthday ranks as one of sport’s greatest-ever feats.

Then he will eclipse it next week.

“It’s a magical moment for me,” Federer said after breaking his two-and-a-half-year grand slam title drought.

“It just feels amazing. As we know, the world No.1s, you don’t get those gifted.”

Federer’s latest conquest came two weeks before his twin daughters’ third birthday and little Charlene Riva and Myla Rose were among the capacity crowd who afforded the grasscourt colossus a standing ovation as he hoisted the trophy once again.

Billions of televisions viewers in 200 countries watched to see the historic final.

As one sharp observer tweeted: “Murder She Wrote on ITV: Nobody cares who did it this time, Lansbury.”

Federer did it – and Murray’s pain and suffering continues.

The Scot also lost his three previous grand slam finals – to Federer at the 2008 US Open and 2010 Australian Open and to Novak Djokovic at Melbourne Park last year. . “Firstly, I’d like to congratulate Roger,” the shattered Murray said.

“He played a great tournament. Even though he had some struggles early on with his back, he showed what fight he still has left in him.”

A 40-minute rain-delay with the match on a knife edge at a set apiece and 1-1 in the third forced the roof closure and Federer – the finest indoors player on earth – raised his imperious game to ridiculous levels upon the resumption.

With a sublime mix of slices and spin, crazy angles and ferocious power, Federer had the home hope under unimaginable strain serving at 2-3 down.

In a punishing 20-minute game, which featured three Murray tumbles and relentless retrieving, the Scot finally buckled on his sixth break point down under the devastating weight of Federer’s thunderous groundstrokes.

From 4-2 up, Federer comfortably held twice and seized a two-sets-to-one lead with his ninth ace of the match.

The end was nigh for Murray when Federer ripped a backhand crosscourt pass for another break and a 3-2 lead in the fourth set and the brilliant Swiss dropped to his knees after claiming the title on his second match point after three hours and 24 minutes.