Two weeks after being 'kicked out' of Wimbledon qualifying, Australian teenage tennis ace Luke Saville has returned to the All England Club on a mission to defend his junior crown. 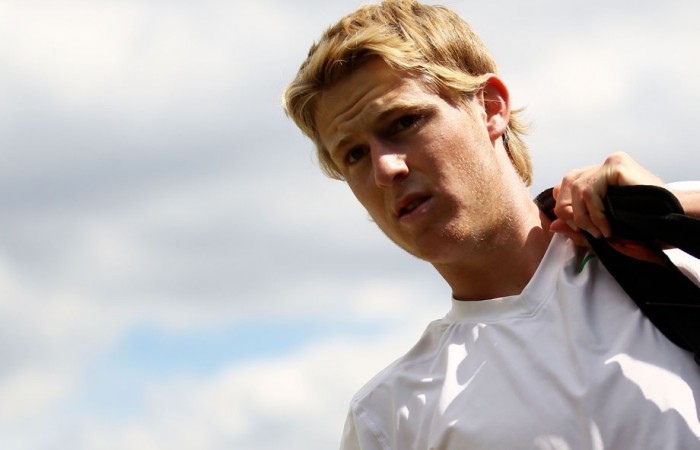 Two weeks after being “kicked out” of Wimbledon qualifying, Australian teenage tennis ace Luke Saville has returned to the All England Club on a mission to defend his junior crown.

Such a significant triumph would complete the most tumultuous month of the 18-year-old’s budding career.

Saville, who backed up his Wimbledon victory last year with success at the Australian Open in January to join fellow Australians Pat Cash and Bernard Tomic as a dual junior major winner, was chuffed to have received a wildcard into the Wimbledon men’s qualifying event.

But due to an administrative blunder and inflexible officials, the South Australian was removed from the qualifying draw.

“I was bitterly disappointed for a few days, but that’s in the past now,” Saville told AAP ahead of his first-round clash on Monday with Frenchman Lauren Lokoli.

“I was entered in another tournament in Germany, a Futures (event), so that wasn’t too good, a bit of a mistake.

“The tournament was run by the ITF and this is an ATP event and there was some ruling there that, if you’re entered in a tournament the same week, no matter what it is, the same week as Wimbledon, you can’t play the Wimbledon qualifying or the main draw.

“So they told me that news and I obviously wasn’t too happy with it, but what can you do?

“They told me and they kicked me out, so what can you do?”

Saville hoped Wimbledon, being the most prestigious tournament in the world, would take precedence over a small-money, low-key, second-tier event in Germany and he’d be released from the draw.

“I’d think they would, but they didn’t let me, which was very, very unfortunate,” he said.

With no choice but to, Saville has moved on to the challenge of joining rarified company as a triple junior grand slam champion.

He says that’s motivation enough to put the bureaucratic bungle behind him.

“I’ve had a great junior career,” he said.

“I’ve won Wimbledon last year and the Australian Open, my home grand slam, so obviously I’m looking to win this one.

“But it’s six tough matches away. I’m looking at first round and it’s a tough one – he beat me last week (at the lead-up event) – so who knows what’s going to happen.

“But I played great last year here, I’m confident in my own ability and confident I can turn it around.”