Aussies Ben Mitchell and James Duckworth will fight for their place in the Wimbledon main draw by attempting to come through this week’s qualifying event. 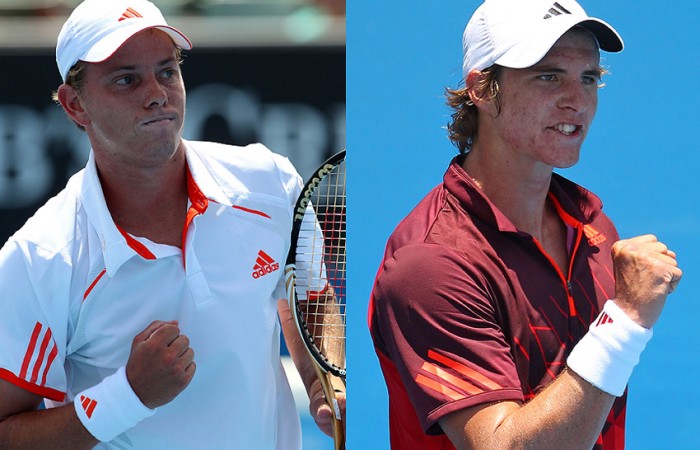 Australians Ben Mitchell and James Duckworth will fight for their place in the Wimbledon main draw when they attempt to come through this week’s qualifying event.

The Aussie pair is aiming to join compatriots Bernard Tomic, Matthew Ebden, Marinko Matosevic and Lleyton Hewitt in the main draw at the All England Club.

Mitchell will face Brit Chris Eaton in his first qualifying match, hoping to score his first win on the lawns after consecutive first-round qualifying losses at challenger events in Nottingham.

It is the first appearance for the world No.234 at Wimbledon, who on paper is expected to beat his opponent – Eaton is a wildcard into the qualifying draw and is currently ranked outside the top 500.

The winner faces a projected meeting with top seed Jurgen Zopp of Estonia in the second round.

Duckworth has been handed a tougher draw in 16th seed Aljaz Bedene of Slovenia.

Yet the 20-year-old, currently Australia’s fourth-ranked player at world No.194, comes into the match with some grasscourt form under his belt after having reached the quarterfinals at last week’s Nottingham challenger.

His opponent is also well-grooved, with Bedene winning the Challenger event in Kosice, Slovakia in the same week. However, that tournament was contested on clay.

Like Mitchell, this is the first time Duckworth will be playing at the Wimbledon championships.

The men’s qualifying tournament, beginning on Monday, is held at the Roehampton Club, just a few kilometres from the All England Club.

Women’s qualifying is due to kick off on Tuesday, with the draw still to be announced.