Two golds and a silver for Aussies at Deaf Games

Aussies Glen Flindell and John Lui have dominated the tennis event at the Asia Pacific Deaf Games, with gold and silver in the men’s singles plus doubles gold. 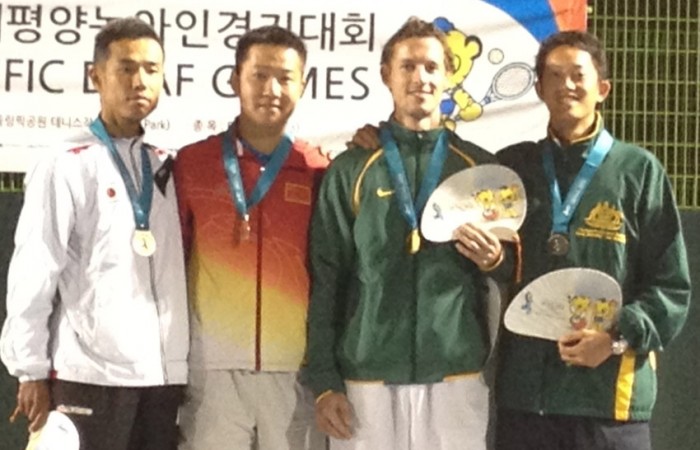 Australia has dominated the tennis competition at the seventh Asia Pacific Deaf Games in Seoul, South Korea with Glen Flindell (Heidelberg, Vic) and John Lui (Lane Cove, NSW) winning gold and silver respectively in the men’s singles, then pairing up to win gold in the doubles competition.

“It’s a pretty awesome feeling standing on the podium in the No.1 position knowing that you’ve beaten all the best deaf players in the Asia-Pacific region,” Flindell said after his singles victory.

“I got goose bumps watching the Australian flag being raised.”

Both Flindell and Lui’s journey to the final was not easy.

“My toughest singles competition came in the semifinal against Matsushita of Japan, who took me to three sets (2-6 6-0 6-1) …  the final against Lui was also hard because I was playing against a fellow countryman, but on the other hand it was a good result (6-3 6-2) because it guaranteed Australia a couple of medals,” said Flindell, speaking from Bundoora Tennis Club in Melbourne.

“In the doubles our toughest competition came in the first round as we drew the strongest pair from Japan, however Lui and I were able to get together quickly and beat them in straight sets then continue our winning form through to the final.”

After a successful Asia Pacific Deaf Games campaign there is no rest for the golden duo – they are back in training for some major tournaments in 2013, including the Deaflympics.

“I hope to replicate or better my doubles silver medal performance at the 2009 Deaflympics,” revealed Flindell.

“Next year John and I also have the National Deaf Championships, so we will be playing in regular tournaments in the lead-up.”