Matthew Ebden has won through to the second round of the Queens Club tournament, while Lleyton Hewitt suffered a straight sets loss to nemesis Ivo Karlovic. 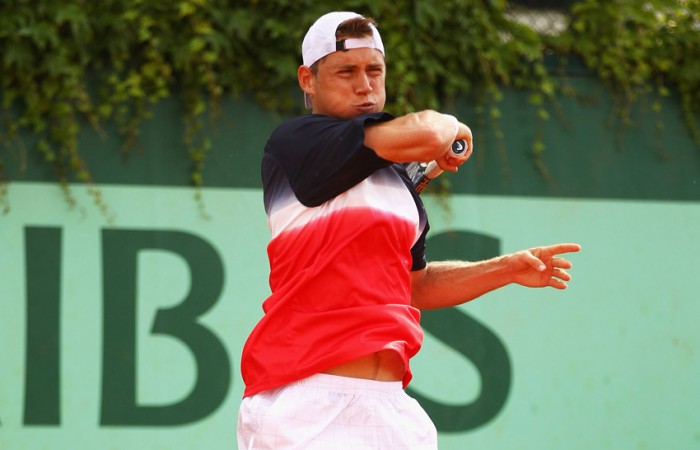 The win comes as a relief for the Western Australian after enduring a lean claycourt season, during which he failed to win a set in five first round defeats at European claycourt events including the French Open.

He scored his last win during Australia’s Davis Cup victory over Korea in early April.

Yet back on his preferred grass, Ebden set to work dismantling Bachinger’s game, defeating the world No.106 in just shy of 90 minutes.

Although he struggled on serve at times – Ebden hit six double faults and managed to land less than half his first serves – he held firm under pressure, saving all three break points he faced.

Ebden will play Croatian No.6 seed Marin Cilic in the next round.

Nine years after spectacularly ending Hewitt’s Wimbledon title defence in the opening round at the All England Club, Karlovic returned to London to haunt the Australian once more with a 6-3 6-2 victory.

The 208cm giant thundered down 22 aces in just nine service games to leave Hewitt shellshocked and desperately lacking match practise less than a fortnight out from the start of the grasscourt grand slam event.

The match was all over in 63 minutes, with Karlovic breaking Hewitt three times and conceding a meagre seven points on serve.

“It was frustrating, to say the least,” Hewitt said.

“I felt like I was actually seeing the ball not bad out there, especially the returns that I could get my racquet on.

“The pressure just builds on your service games, and he’s just lashing at shots left, right, and center. I didn’t serve my best, him serving like that puts a lot more pressure on you.”

Hewitt also fell in the first round of the French Open in his comeback from four months out recovering from career-saving toe surgery.

Hewitt famously claimed Karlovic was “serving out of a tree” when the Croatian became the first man in history to eliminate the Wimbledon champion in the opening round.

It was the same story nine years on as Karlovic struck four successive aces in his very first service game. Aided by two Hewitt double-faults, Karlovic broke Hewitt for 3-1 and that was effectively first set over.

The second set was all a blur for Hewitt as the man mountain continued his serving onslaught and broke twice more to complete the demolition in barely an hour.