Lleyton Hewitt has drawn grasscourt nemesis Ivo Karlovic in the opening round of his Queens Club campaign in London. 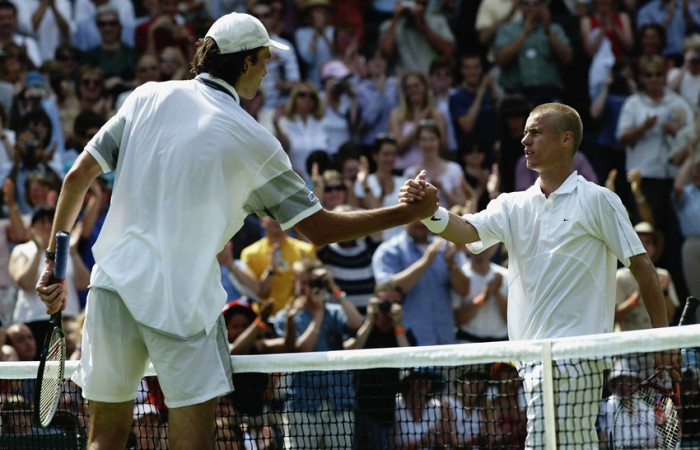 Lleyton Hewitt faces an immediate test of his grasscourt form after drawing a daunting first-round showdown at Queen’s with his Wimbledon nemesis Ivo Karlovic.

Memories of the 208cm Croatian “serving out of a tree” to shatter his title defence at the All England Club in the first round in 2003 will forever haunt Hewitt.

Karlovic, who wears size 16 shoes – because he must – and aces opponents for a living – because he can – also ousted Hewitt from the Queen’s Club event in 2005 and leads the dual grand slam champion 3-1 head-to-head.

Hewitt’s only win over Karlovic came at the 2009 French Open on clay.

The former world No.1 will need to find an immediate answer to Karlovic’s supersonic serving in order to parlay his Queen’s wildcard into any decent pre-Wimbledon match practise in London.

Ranked 176th in the world after undergoing career-saving toe surgery in February, Hewitt’s lone competitive outing in four months was a four-sets first-round loss to Blaz Kavcic at Roland Garros.

“I had to start somewhere,” Hewitt said.

“But it was good for a lot reasons to go out there and play – lasted nearly four hours and physically felt fine.

“Pretty amazing too when you haven’t played any matches on this surface.

“There are positives to take out of it. Obviously there is a lot of different motivations (but) Wimbledon is obviously a priority for me.”

Queen’s starts on Monday, although Hewitt may not play his first-round match until Tuesday depending on the schedule being released on Sunday.

World No.4 Andy Murray and the fifth-ranked Jo-Wilfried Tsonga are the top two seeds for the tournament.

Tomic, who made the Wimbledon quarterfinals last year and will be seeded at London’s SW19 for the first time this campaign, has been pitted against classy German veteran Tommy Haas.

Tomic said after his second-round French Open loss to Santiago Giraldo that he was happy to leave the clay behind for greener pastures in London.

“I can’t wait to get on the grass. It’s now time for me to play well. I’m very confident on grass,” he said.

Former Wimbledon runner-up Tomas Berych is also lurking in Tomic’s quarter of the draw in Halle.