Now with his first French Open match win under his belt, Bernard Tomic has no intention of missing a Roland Garros rendezvous with Andy Murray. 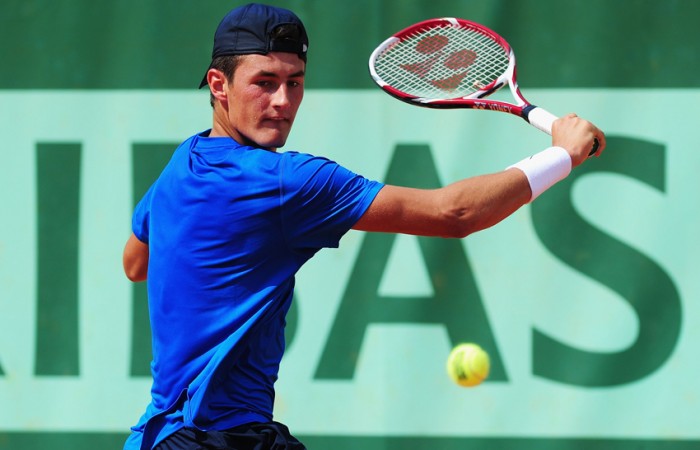 Now that he’s finally broken his French Open duck, Bernard Tomic has no intention of missing a Roland Garros rendezvous with Andy Murray.

Tomic squares off with Colombian Santiago Giraldo on Thursday almost certainly for the right to meet fourth-seeded Murray in the third round on Saturday.

> Photos: the best shots from the first round

“That’s another chance for me,” the Australian teenager said.

“I hope I win my next round to play Andy and to have a chance and have a crack.

“But I’m looking for my first opponent I play on Thursday. If I win that, then it’ll be a great, great third round against Andy.”

> Stosur cruises into third round

But the Queenslander arrived as a seed this year for the first time in his grand slam career – rather than being gifted a wildcard entry – and finally feels worthy of his place in the main draw on his least preferred surface.

He showed as much with a 7-6(5) 6-3 6-3 first-round victory over Austrian qualifier Andreas Haider-Maurer, the breakthrough giving the 19-year-old his seventh claycourt win in a month.

Before last month, Tomic had only managed one ATP win on clay in his entire three-year pro career.

“I think I’m ready to play on clay well, like I have the past six, seven weeks,” said Tomic, the youngest player in the men’s draw.

The 25th seed is feeling even more upbeat about his chances of setting up a showdown with Murray after outclassing Giraldo in Rome just two weeks ago.

“I look at it as an opportunity that last time we played I won,” Tomic said.

“I feel confident playing against him and I believe I can win again.”

> Vote for your favourite Aussies at Roland Garros achievement

Not that he’s complacent.

“He plays on clay really, really well. It’s his favourite surface. He knows how to catch you out, especially if you don’t move well,” Tomic said.

“He knows how to catch you out in drop shots and move you on clay.

“Being a bit quicker (court surface) here, it may be a bit difficult. The court we played on in Rome was a bit slow.

“It will be an interesting match.”

Should Tomic get through, Murray – a semifinalist last year – would need to beat Finnish veteran Jarkko Nieminen or Russian Igor Andreev to confirm his date with the Australian.

The Scot is a heavy favourite to advance after his impressive 6-1 7-5 6-0 win over Japan’s Ito Tatsuma on Tuesday.