Stosur cruises into third round

Sam Stosur has delivered another claycourt clinic to surge into the third round of the French Open with a straight-sets demolition of American Irina Falconi. 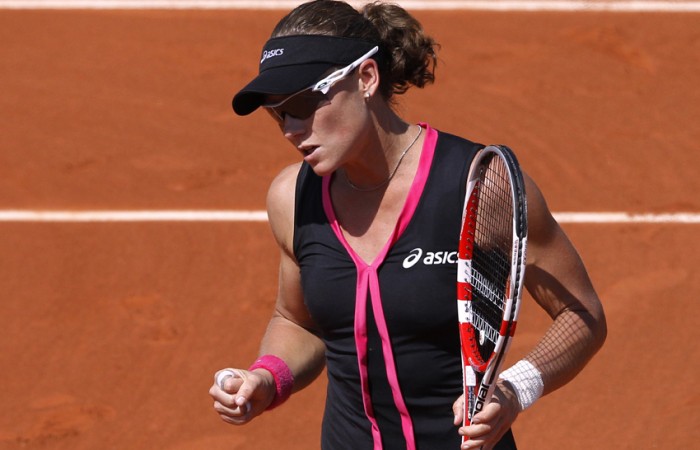 Samantha Stosur has delivered another claycourt clinic to surge into the third round of the French Open with a straight-sets demolition of American Irina Falconi.

Stosur needed a mere 63 minutes to put Falconi to the sword at the Roland Garros “Bull Ring”, powering into the last 32 for the fourth successive year with a 6-1 6-4 mauling.

“I thought I played pretty well. It was a good match. I was happy with it,” Stosur said.

She made a similarly impressive start to her 2011 tournament before suffering an inexplicable third-round loss to Giselo Dulko.

But the US Open champion said she still preferred to cruise early in a grand slam than get bogged down in draining dog fights.

“I don’t think anyone would complain,” Stosur said.

“I think you’ve just got to take whatever comes. I mean, the idea is to win as well as what you can.”

The sixth seed is sure to face a much sterner test of her title credentials on Friday in a showdown with Russian rival Nadia Petrova.

Petrova, the 27th seed, ousted South African Chanelle Scheepers 6-3 6-3 in her second-round match on Wednesday and boasts a 5-2 lead over Stosur in their career series.

Their past two clashes have been epics, both going the distance with Stosur triumphing in a midnight thriller at last year’s US Open and Petrova gaining revenge at Indian Wells two months ago.

Falconi offered Stosur no such resistance.

The Australian was on her game from the get-go, unleashing two monster forehands to break Falconi in the second game before holding to love for 3-0.

She grabbed a double break to roar ahead 5-0 and the first set was as good as over, Stosur eventually claiming it after 25 minutes with a wide-angled ace.

On cruise control, Stosur crunched another forehand winner to snare the only break of the second set in the fifth game and completed the comprehensive victory after barely an hour.