UPDATE: Bernard Tomic won his first career main draw match at Roland Garros on Monday, but Matthew Ebden was unable to join him in the second round. 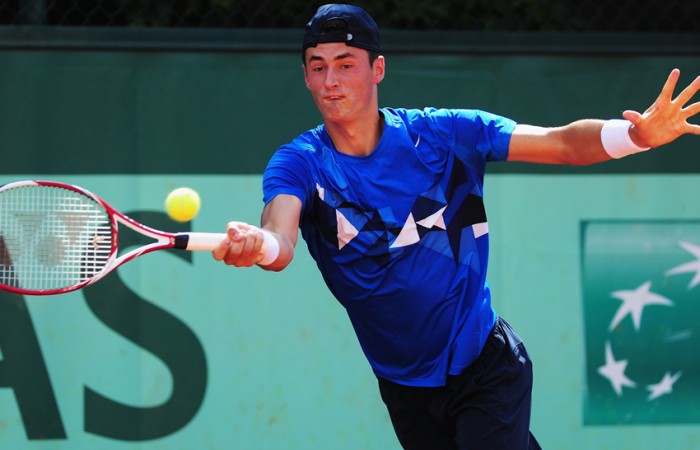 Teenage tennis prodigy Bernard Tomic is surprising even himself with his rapid development on clay.

The youngest player in the men’s French Open draw, 19-year-old Tomic marked his maiden grand slam seeding with a breakthrough win at Roland Garros on Monday.

“It’s been a while. It feels great,” said Tomic after his impressive 7-6(5) 6-3 6-3 success over Austrian qualifier Andreas Haider-Maurer.

“Having played a few times and lost first round, it was a bit difficult – and especially at a young age, I think getting wildcards here was not my go.”

Tomic had barely won a claycourt match before arriving in Europe last month, but has since chalked up seven victories on the slow red surface.

“It went better than I hoped. I struggled in matches last year and, the year before, I couldn’t win a match on clay,” said the 2011 Wimbledon quarterfinalist.

“Now to have played six, seven weeks and I’ve gone into some tournaments in the quarters and basically every tournament I played, I won a round – except Madrid.

“So it’s good. I’m moving good. My body is feeling much stronger and I think this is going to help me a lot for the grasscourt season.”

In hot and windy conditions on the unprotected court 16, Tomic rebounded from dropping his opening service game to dust up Haider-Maurer in straight sets.

And Australia’s 25th seed quite enjoyed the experience.

“It was very dry and tough to move on so I asked for it to get watered each set,” Tomic said.

“But it’s a different feeling playing at the courts at the back. They bounce a bit higher so it’s a whole new game plan to playing at the bigger stages here.

“But I think I’m playing well. I’ve had a good claycourt run and I’m feeling good and excited for the next round ahead of me.”

Tomic faces Santiago Giraldo, a Colombian he beat two weeks ago in Rome.

“It’s a good opportunity,” he said.

“If I can win that match and get into the third round here, it’s huge for me. I haven’t done well in the past, so every win is a bonus. That’s the way I look at it.”

A repeat victory over Giraldo could set up a third-round clash with fourth seed Andy Murray.

Meanwhile, Matthew Ebden continued to struggle on the red dirt, falling in straight sets to No.24 seed Philipp Kohlschreiber.

Ebden, who failed to win a set in four claycourt events leading into Roland Garros, was unfortunate to draw the experienced German, who won the ATP claycourt title in Munich just three weeks ago.

In an encouraging start, the Aussie broke serve for the only time in the match, only to have his own serve broken twice as Kohlschreiber went on to snatch the opening set.

The 24th seed quickly established a two-set lead but had to contend with an improved Ebden in the third stanza, who cleaned up his game while at the same time ratcheting up the pace on his groundstrokes.

In a high-quality display, the pair combined for 33 winners to 21 errors, served truly and showed off their all-court panache with several successful forays to the net.

Yet unfortunately for the Western Australian, Kohlschreiber had just a little too much polish, wrapping up a 6-4 6-4 7-6(4) win.

The German will take on Argentine Leonardo Mayer in round two.