Aussie men all in action on Day 2

Australian trio Bernard Tomic, Lleyton Hewitt and Matthew Ebden will fly the flag on Day 2 of the French Open at Roland Garros. 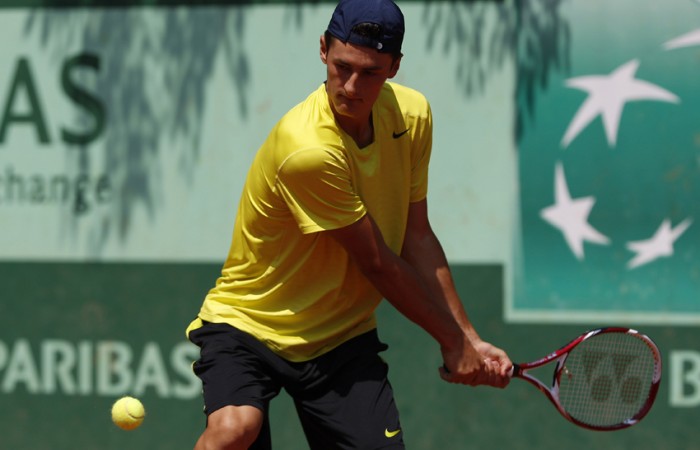 Looking to join compatriot Sam Stosur in the second round of singles competition at Roland Garros will be Australia’s male contingent, with Bernard Tomic, Lleyton Hewitt and Matthew Ebden all in action on Monday at the claycourt Grand Slam.

Leading the charge will be Tomic, seeded at a major for the first time in his career at No.25 and who has enjoyed a solid build-up to his French Open campaign.

Ebden will be looking to reverse a forgettable run of form on clay when he takes on 24th seed Philipp Kohlschreiber, while Hewitt will be making his first competitive appearance since Australia’s Davis Cup tie against China in Geelong following surgery on his foot.

Alongside the Aussies in action in the French capital will be some of the big guns of the sport, including world No.1’s Novak Djokovic and Victoria Azarenka, who will play their first round matches on Court Philippe Chatrier. Roger Federer and women’s defending champion Li Na will also headline the Day 2 schedule.

You can catch all of the action tonight live on Fox Sports 3 from 7pm AEST. For more information, visit our TV Guide.

Bernard Tomic [25] v Andreas Haider-Maurer (AUT) – first round, Court 16, third match
The 19-year-old Tomic arrives a Grand Slam seeded for the first time in his blossoming career, and will look to continue the form that saw him go a respectable 6-6 on clay in the lead-up to Roland Garros. Although not his preferred surface, Tomic continues to improve his fitness and movement, key qualities for success on the dirt. Having never been beyond the opening round in Paris, Tomic will fancy his chances against the little-known Haider-Maurer, who at world No.155 had to slug through three rounds of qualifying to take his place in the main draw. The pair have never before met.

Lleyton Hewitt [WC] v Blaz Kavcic (SLO) – first round, Court 7, first match
It’s hard to know how the Aussie veteran will fare in this match, with Hewitt having been inactive for almost four months following foot surgery. But despite his limited preparation coming into the French Open, Hewitt can never be discounted, his tigerish fighting qualities and ability to grind from the back of the court translating well to the Parisian clay. In fact, despite thriving on faster surfaces, Hewitt is twice a quarterfinalist at Roland Garros, in 2001 and 2004. Kavcic, the world No.99, defeated Hewitt in their only prior meeting at last year’s ATP event in Winston-Salem, and arrives in Paris with the Sao Paulo claycourt Challenger title under his belt. Revenge will be at the forefront of Hewitt’s mind, along with the added incentive of a likely crack at top-ranked Novak Djokovic in the second round.

Matthew Ebden v Philipp Kohlschreiber [24] (GER) – first round, Court 4, fourth match
Ebden will be hoping to forget about the form that has preceded his first round match at Roland Garros. In four claycourt events prior to the tournament, Ebden fell at the first hurdle in each, and failed to win a set. Things don’t appear to get any easier in the French capital, with the Western Australian drawing 24th seed Philipp Kohlschreiber. The German, ranked 50 spots higher than Ebden, won the ATP event in Munich on clay earlier in May. Having never faced off before, Ebden will be hoping this unfamiliarity stands in his favour, and will look to attack Kohlschreiber with his nimble movement and point-ending forehand.