There was no stopping Australia’s Junior Davis Cup team as they completed a stunning week in Bendigo, defeating Japan to win the Asia/Oceania qualifying event. 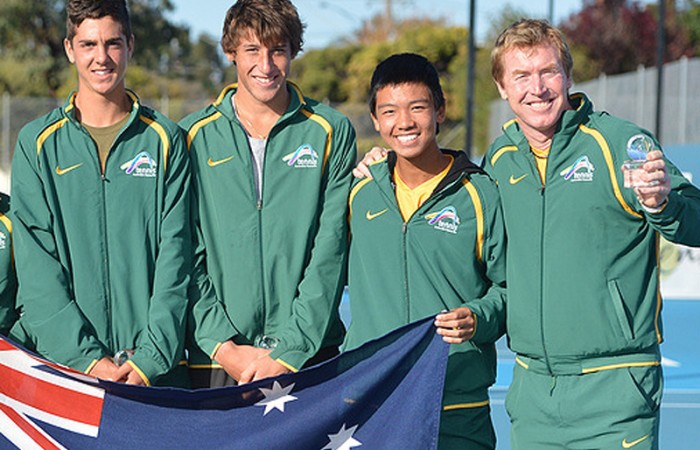 There was no stopping Australia’s junior Davis Cup team as they completed a stunning week in Bendigo by defeating Japan 2-1 to claim victory in the Asia/Oceania final qualifying event. By progressing to the quarterfinal, the team had earlier guaranteed qualification for the world junior final in September.

Today’s victory came down to a high-stakes doubles rubber after Li Tu surrendered a tight three-set singles match to Jumpei Yamasaki before Thanasi Kokkinakis levelled proceedings with a 6-1, 6-1 win over Naoki Nakagawa.

Solid in every rubber he’s contested this week, Kokkinakis then combined for the first time with Daniel Guccione in doubles, the pair growing increasingly confident as they defeated Nakagawa and Yamasaki 6-4, 6-0.

Kokkinakis attributed success to a solid team environment. “It’s been a good tournament, everyone played really well and Gooch stepped up in the doubles when he needed to,” the South Australian surmised.

Guccione was pleased his big-serving style proved so effective throughout the week and particularly in today’s must-win doubles.

“It feels really good,” he said. “All of the boys felt like they played really well during the week. We had a few great matches and we’re excited to head to Barcelona.”

Team captain Mark Woodforde said it has been a privilege to see each team member’s progress. “Their development is a pleasure to watch,” he said. “There was a little difference, with each of the players, Thanasi, Dan and Li, it was a splendid week to come out with the win.”

The successful week becomes a perfect predecessor as attention turns to individual goals throughout the year, including ITF events in Asia and Europe.  In the longer term there’s the prospect of contesting the world junior final in Barcelona. Japan, China and Korea were the other Asia-Oceania teams to qualify.

Australia has recently set a high standard in the junior world team event, with their six victories including the 2009 title, when Luke Saville, Joey Swaysland and Jason Kubler brought the trophy home.

Preparing for Barcelona’s clay courts will be a focus in the lead up to this year’s final.

“I know they are all really well travelled but to spend some time on clay is a real bonus for them,” Woodforde said. “As long as we can get over there with enough time to prepare. I think preparation on a surface that they haven’t played on much in their young careers so far is going to be important.”

Boosting preparation for the final is the knowledge that Australian players have a tradition of solid support in the group setting.

“There’s a saying that can be used quite often, ‘we’re a champion team, we don’t need to be a team of champions, as long as we’re a champion team’ and I’ve tried to explain that this week is a team event,” said Woodforde, who hopes the workload will be similarly shared in Barcelona.

“They were all worthy of playing singles and doubles and I think in the end here – and as well as the final – that everyone can get out there and play.”