Davis Cup is proving a powerful learning environment for Thanasi Kokkinakis, who has helped Australia’s Junior Davis Cup team progress to the final in Bendigo. 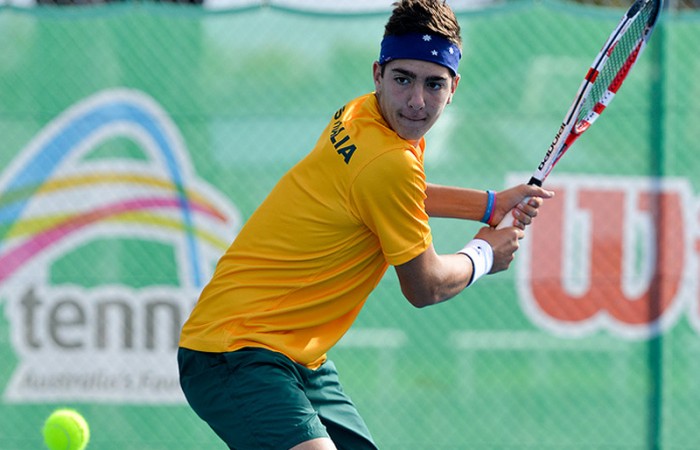 Davis Cup is proving to be a powerful learning environment for Thanasi Kokkinakis. Earlier this month, the South Australian teenager was Orange Boy as Australia’s Davis Cup team defeated Korea in a zonal tie in Brisbane. This week, Kokkinakis played a key role in helping Australia’s junior Davis Cup team qualify for the world final and progress to the final of the Asia/Oceania qualifying event in Bendigo.

Witnessing the professionalism of the senior Davis Cup team members provided a valuable marker for Kokkinakis, who admitted it took time to adjust to the standard of hitting at that level.

“It was good, a great experience. At the start I was a little bit shocked because there was (Lleyton) Hewitt there, (Bernard) Tomic there, (Pat) Rafter and Tony Roche,” he recalled in Bendigo.

“I hit pretty average on the first day, I felt a bit rushed. But the next day I got a bit of a warm up and got to hit more with the boys … from there I hit more and more and felt more comfortable.”

While gaining confidence in the senior setting, Kokkinakis was also gaining advice. Volleying tips were a focus for Rafter and Roche, while Hewitt helped with ground strokes and Rafter added extra tips on serve.  “They all had a say, which was good. I definitely listened,” said the 16-year-old.

Those lessons have showed this week in Bendigo, where Kokkinakis is yet to drop a set in the two singles rubbers he contested in the round robin stage and in quarter-final wins over Chinese Taipei’s Yi-Wei Huang (who retired hurt while Kokkinakis led 6-4, 2-1) and Korea’s Hyeon Chung.

“It’s such a unique opportunity that I’m glad he was able to experience,” Woodforde noted. “It’s about giving him the idea of what he needs to do in the future. I think at this age I believe it’s about the experiences and trying to look forward.”

With an obvious willingness to spur each other along, that developing professionalism has in fact been reflected in every Australian boy competing in Bendigo this week.

The Australian team has also discovered a handy doubles combination in the big-serving Guccione and versatile Li, who today claimed the doubles against Koreans Chuang and Geon Ju Shin win 6-4, 7-5 – a live doubles rubber that sealed progression to tomorrow’s final, where the team will take on Japan.

Having earlier achieved the important objective of reaching the final four, which guaranteed progression to September’s junior world final, the team will gain key experience from the final in Bendigo. Woodforde believes the collective effort of all three boys could once again provide an edge.

“I’m a big believer when you’re playing the whole week and match after match that’s when the team really comes into it, they’ve all contributed so far,” he said, adding that the pressure finish to today’s semi-final was an important test.

“Now they’ve had a tough match they understand what the nerves are about … They’ve been able to really embrace it today because they’ve come home with a win. Hopefully that will help with tomorrow.”

For Kokkinakis, who also helped Australia qualify for the final last year before he was sidelined with a back injury, it could be another big step in his junior development.

“I’ve grown a lot,” he said of his progress since last year. “I played my first tournament (back) in January. I’ve kind of been building up. I’ve been playing all right and I’ve been feeling good.”