Australia has sealed its place in the Junior Davis Cup final after a 3-0 quarterfinal win over Chinese Taipei in the Asia/Oceania qualifying event in Bendigo. 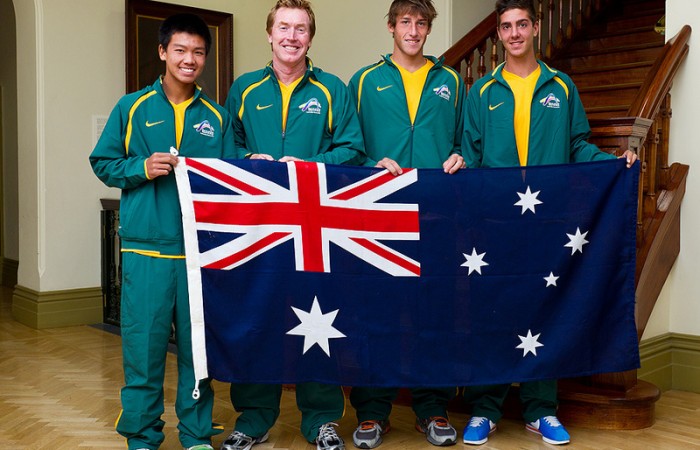 Nothing would mean more to the Australian boys competing in the junior Davis Cup team than the chance to be claim the world team title in Barcelona, Spain, in September – and that dream is starting to become more real after Australia sealed a place in the final after a 3-0 win over Chinese Taipei in the quarter-finals of the Asia/Oceania Final qualifying event in Bendigo.

Having claimed every tie of the round robin stage, the Australian team made quick work of today’s opponents, Daniel Guccione defeating Yung-Chien Teng 6-3, 6-1 in the opening rubber before Thanasi Kokkinakis claimed his third singles win for the week when Yi-Wei Huang retired with injury while the Australian held a 6-1, 2-1 lead. Li Tu then combined with Kokkinakis to complete the tie with a 6-1, 6-1 doubles victory over Wu Lu Chang and Teng.

“Congratulations to them. They kept the foot on the accelerator. There was no letting up in their form today,” said team captain Mark Woodforde, who conceded the local boys started fresher after Chinese Taipei completed their final round robin tie against Uzbekistan late last night.

“But you know, that’s the way it goes,” Woodforde added, noting the importance of every Australian team member gaining experience and confidence throughout the week. “I think that also proves the value of having a team that you can switch in and out.”

A member of the team that also helped Australia qualify for last year’s junior Davis Cup final before he was sidelined by a back injury, Kokkinakis is now thrilled at the possibility of representing Australia later this year.

“It’s a good feeling. Hopefully I can actually play it this time,” said the South Australian, who has claimed all three singles matches he’s contested this week. “It will be a good challenge.”

The big-serving Guccione, who competed in the final in Mexico last year, is equally excited at the prospect of representing his country again.  The Victorian explained that the chance to play in September’s final will be a driving force as he prepares to contest ITF Futures tournaments in Asia before then.

“Definitely it’s a motivator. I just want to play well. If I can get to Barcelona it will really be great,” he said.

Australia takes on Korea in tomorrow’s semifinal and despite achieving their overall goal of qualifying for the final, the team is focused on maintaining the high standard they’re set so far this week.

“We’ve made the top four but I’m still trying to motivate the guys,” said Woodforde, who believes the team members have both the poise and maturity to claim an overall victory in Bendigo.

“Their experiences of their own travels at this young age – they’ve been to a lot of countries, they’re not really fazed by whoever they play. They think they can get this done.”

It’s a collective attitude that highlights the importance of the world team event as a stepping stone to elite level success. As Woodforde noted, “Maybe the dreams can become a bit more real to them after a week like this.”