Inspired play by its team members has helped Australia's Junior Davis Cup team sweep all matches in its pool, vaulting the host nation into the quarterfinals. 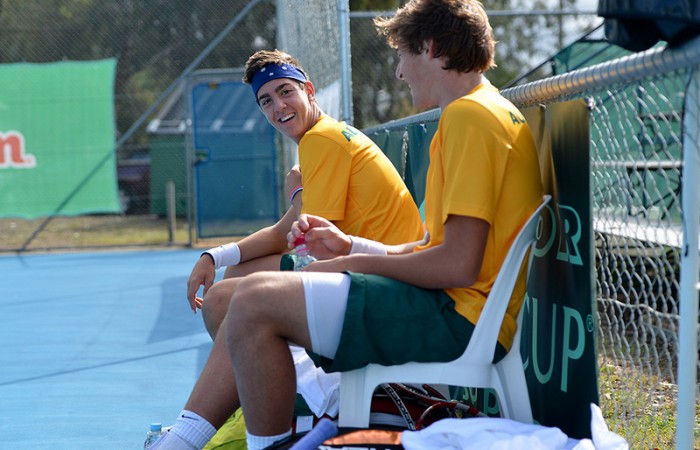 Watching Li Tu showcase the best of his speed and versatility at the junior Davis Cup final qualifying event in Bendigo, it’s hard to believe the South Australian ever questions his form or motivation. Yet the 16-year-old admits that the call-up to compete for the junior national team was the catalyst he needed during a rare flat spot in his tennis life.

“It was really exciting because I remember I was practising and I was feeling pretty flat, then I got the call up that I’d be playing junior Davis Cup and it really pumped me up,” said Li.  “I started training a lot harder and getting ready.”

That training period was clearly time well spent, with Li whipping past Kazakhstan’s Alex Kim 6-0, 6-0 in his opening match and dropping just a single game in his second singles rubber against New Zealander Kyle Butters.

The South Australian was made to work harder in a 4-6 6-1 6-2 win over Philippines’ Jurence Zosimo Mendoza this afternoon, but was justifiably confident after that victory sealed Australia’s progression into the quarterfinals – and a crucial step closer to the teams’ goal of finishing in the final four and qualifying for the final in Barcelona, Spain, in September.

“It gets me very excited for the tournament and every match that I play,” Li said of his form in winning all three singles rubbers in Bendigo.

Thanasi Kokkinakis is feeling similarly revived by some stunning performances in the junior teams event, after dropping a total of just three games in singles rubbers against Kazakhstan’s  Roman Khassanov and New Zealander Alex Krintachov. The South Australian is making his second appearance in the Junior Davis Cup, having helped Australia qualify for the final last year only to be sidelined for a seven month period with a stress fracture in his back.

“Every time you get to play its so good being in the team environment, especially with Woody (Mark Woodforde) as coach,” said Kokkinakis, who has posted solid results in Pro Tour events in Bundaberg and Mildura since making his comeback from that injury.

Daniel Guccione further highlighted the strength in the Australian boys’ team as he stunned the Philippines’ Kyle Benjamine Parpan 6-1 6-1 in their singles rubber this afternoon, the 190-centimetre Victorian impressing with his serve-volley style and powerful groundstrokes.

The ability to deliver such a performance in the team setting is of tremendous value to the 16-year-old.

“It’s a real honour to play for Australia. I love playing in the teams events and having a coach on the court is really good,” Guccione said.

“Given the past involvement, the way that the week unfolds, it’s a heavy workload just to rely upon two singles players. But of course then there’s the quandary,” Woodforde said.

“Tomorrow Thanasi will certainly be back in action. You’ve got to go with the strength up the top and then it’s really a coin toss between Li and Dan.”

It’s a welcome dilemma for Woodforde to face as he contemplates Australia’s clean sweep of their round robin ties.

“One dropped set, I think it’s nice. I mean Thanasi has really been striking the ball fine far but for Li just to be able to feel that he’s pushed, for him to be a better tennis player in years to come he’s got to be able to change his game and not continue on with a losing game,” he said.

“He’s got a deep repertoire of shots, so it was good for him today.”