Australia’s Fed Cup team have ramped up their preparations for this weekend's tie with a solid second hit-out on the clay of Stuttgart's Porsche Arena. 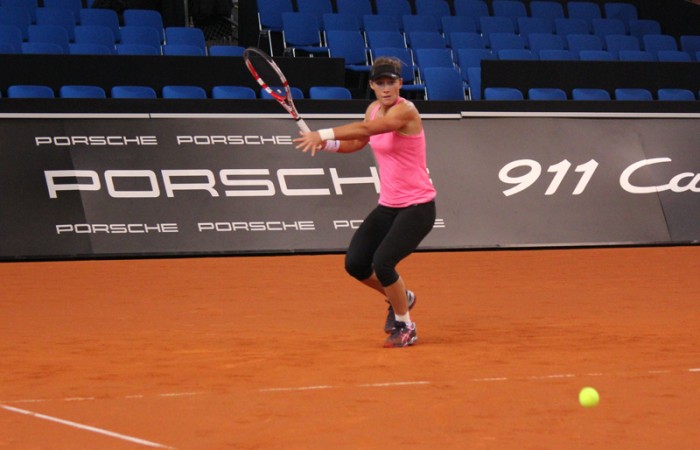 Shaking the jetlag out of their systems with a practice session on the day of their arrival in Stuttgart, Australia’s Fed Cup team have ramped up their preparations with a solid second hit-out on the indoor red clay of the Porsche Arena.

This weekend the team will take on a mighty German line-up for a place in the elite eight-nation World Group, a tie that promises to showcase some of the finest women’s tennis in the world.

Australian captain David Taylor says the strength of the two teams would make for one of the highest-standard ties being played out in this week’s round of Fed Cup competition.

“There’s a lot of local interest, because obviously the Germans have four top 20 players and we have a top five player ourselves (in Sam Stosur), so it’s an incredibly strong tie, with almost a quarter of the world’s best tennis players in the one venue,” he said.

“I think we’re going to have a great preparation, there’s a lot of court time easily available to us, and it’s going to be a very interesting and meaningful tie for both nations.

“It’s (also) a great venue, purpose-built for the tournament the following week, so it’s probably the nicest venue we’ve played at in recent memory.”

That tournament is the WTA Premier-level Porsche Tennis Grand Prix, Europe’s longest-running women’s indoor event and one at which Stosur has enjoyed considerable success. In 2010, she won her way through to the final before falling to Justine Henin in three sets, and last year reached the semifinals only to be stopped by local Julia Goerges 7-5 in the third.

Goerges, who went on to win the title, will be part of the German team for this World Group Play-off tie. She will be joined by world No.11 Andrea Petokovic, last week’s Copenhagen winner Angelique Kerber, and doubles specialist Anna-Lena Groenefeld.

Stosur said her previous success at the Porsche Arena would hopefully bode well for a good performance this weekend.

“It’s always good to be here. This is a great court to play on. I’ve played this tournament where we’re playing a few times and done quite well, so hopefully I can get used to those conditions again and really enjoy the week,” she said.

“But it’s going to be tough playing the Germans. Here we’ll have a packed house which is going to be great to play in front of, but I don’t think we should expect too much support from the sidelines.”

Stosur’s experience and success here contrasts sharply with some of the other Australian team members.

Olivia Rogowska is making her Fed Cup debut this week, her selection a reward for her impressive start to 2012 which featured a quarterfinal finish at the WTA event in Kuala Lumpur, reaching the second round of the Australian Open, and hitting a career-high ranking of world No.111 in early March.

The 20-year-old Victorian’s red clay credentials include winning through to the second round at Roland Garros in 2009, and she said she had relished the chance to hit with Stosur in Stuttgart.

“It’s very exciting (here), everything is top-quality and so organised, and it was a great experience hitting with Sam, so yeah, it’s a good week,” she said.

“I’m loving the European clay, I’m really enjoying the conditions. Everyone seems to be hitting the ball really good. It’s a great atmosphere, everyone seems relaxed and yeah, it’s a lot of fun to be training.”

Casey Dellacqua is another player who loves the atmosphere of representing her country, describing the Fed Cup competition weeks as the most enjoyable on the tennis calendar.

Like Rogowska, Dellacqua is new to Stuttgart, but comes into the tie following a productive four-week training block and with the confidence of having enjoyed success at Fed Cup level prior to this tie.

“I’ve never been here before, so it’s good to come somewhere different. The claycourts are playing really nice,” she said.

“I feel pretty good and ready to get stuck into some matches … this is another good week for me to get some really good practices. I feel good and the body’s good, so yeah, no complaints.”

Most likely to join Stosur as Australia’s second singles player will be Jarmila Gajdosova, who secured a thrilling-victory in the decisive rubber against Switzerland – also on indoor red clay – to allow the team move through to this stage of the competition.

Despite a streaky 2012 season, with that great Fed Cup performance and a gritty run to the Indian Wells third round interspersed between five first round losses, Gajdosova is hopeful of a good display of tennis in Stuttgart.

“Two good teams are playing against each other, and we are playing in a very nice stadium. The court is great, and a lot of players like coming to the tournament next week here as well, so it’s really nice, and we are being treated very well,” she said.

“So I think it’s going to be a lot of good tennis to watch, and hopefully we do well.”

The Aussie girls will continue to train ahead of the tie, which kicks off on Saturday 21 April.

You can catch highlights and live coverage on Fox Sports 2 and 3 on Sunday 22 April, and visit our Fed Cup page for all the latest information, news, score updates, videos and photos.