Australian Davis Cup captain Pat Rafter has several matters to tackle ahead of this weekend's tie against Korea, held at the Brisbane arena that bears his name. 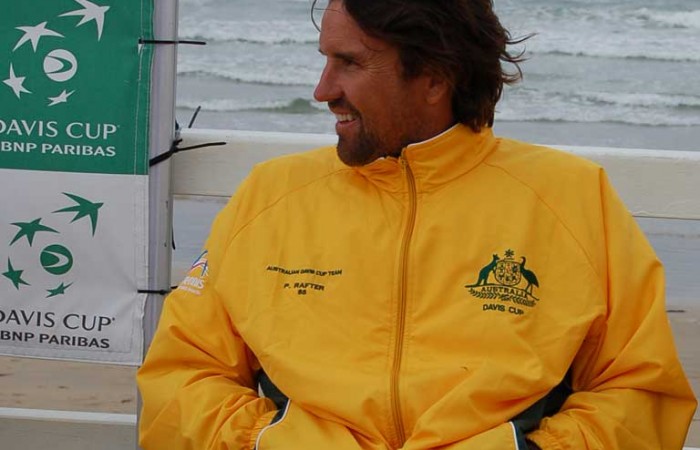 The latest Bernard Tomic controversy appeared to be the last thing on Patrick Rafter’s mind ahead of Australia’s Davis Cup playoff with South Korea in Brisbane.

The Australian captain is sweating on the fitness of the big-serving Chris Guccione (foot) ahead of the Asia/Oceania Zone Group I second-round tie starting on Friday.

Then there’s the dilemma of choosing between fast improvers Matt Ebden and Marinko Matosevic for his second singles berth behind world No.37 Tomic.

But Rafter said he would not waste time worrying about Tomic’s “head space” until the lanky 19-year-old arrived in Brisbane early next week.

Tomic appeared to have a very public fallout with his father – and coach – John at last week’s Miami Masters.

During the teenager’s loss to David Ferrer he asked the chair umpire to have his father removed from the courtside seating because he was “annoying” him.

“Is it a distraction? I guess only time will tell but I don’t think so,” Rafter said of the Tomic incident.

“Bernie is not here yet so I don’t know where his head space is right now.

“Until he shows up and we have a good chat (I won’t know), but I am predicting there won’t be.”

Likely doubles player Guccione was a notable absentee at team practice on Pat Rafter Arena on Saturday after suffering a toe injury.

Rafter said Guccione’s availability should be determined by Sunday.

He also faces a welcome headache – picking his No.2 singles player.

World No.78 Ebden and No.122 Matosevic will keep Rafter honest thanks to recent form.

But Matosevic won seven straight matches from qualifying to reach the Delray Beach final and he also got through qualifying at Indian Wells this month.

“On ranking, Matt is probably the player but I like having three solid singles players in form (fighting for spots at training),” Rafter said.

A singles spot is open for Australia after Lleyton Hewitt underwent toe surgery, ensuring he will be out of action until the lead-up to Wimbledon in June.

But he has been making his presence felt at practice in Brisbane, offering advice garnered from 32 Cup ties – equal to Todd Woodbridge’s record for most by an Australian.

“He is trying to get this one knocked off as No.33 so he can have the record,” Rafter laughed.

“We are trying to build up team unity at the moment, and for him to come along at this time is special for us.”