Agnieszka Radwanska halted a six-match losing streak to Maria Sharapova by upsetting the Russian in the Miami final, claiming the biggest title of her career. 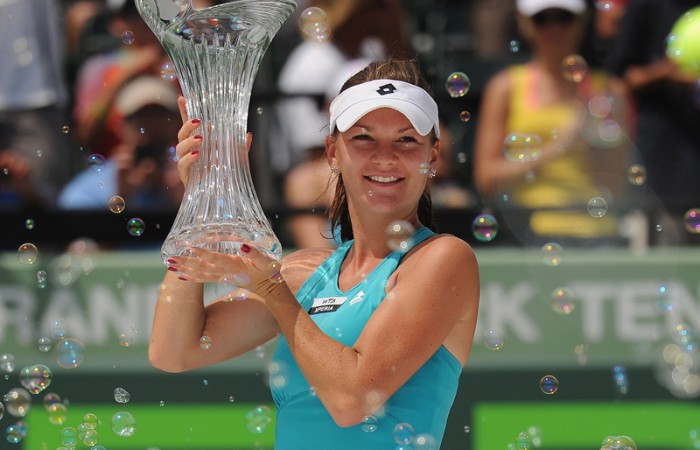 If the women’s draw at the Sony Ericsson Open was a who’s who of women’s tennis from the last decade, today’s final was all about the in-form players. Alongside Victoria Azarenka, Maria Sharapova and Agnieszka Radwanska have probably been the highest achievers of 2012 thus far, Sharapova reaching her third final (after the Aussie Open and Indian Wells), Radwanska her second (Dubai).

And while the stats from the match may make for difficult reading – particularly on Maria’s side – Radwanska’s 7-5 6-4 win made for compelling viewing.

It was a match that started as it continued throughout, with Sharapova attacking and Radwanska soaking up the pressure. Time and time again the world No.2 pushed the fifth seed around the court, looking to create some sort of an opening. But Radwanska is nothing if not resilient, and the Pole chased everything down. Sharapova got close to breaking on a number of occasions in the early exchanges, but could never quite get ahead in a tight opening set.

For all her attacking play, Sharapova was notching up a large amount of unforced errors – 24 in the first set alone. And the more the ball flew long, wide or into the net, the more frustrated the Russian became. Sensing this, Radwanska worked hard to ramp up the pressure on the Sharapova serve, turning the screw as the Russian’s demons began to take hold.

At 5-4 on serve Radwanska came close to the break. At 6-5 she took the set with the simplest of breaks. Three unforced errors gave from Sharpova gave the Pole three set points. Sharapova saved two but then sent a forehand woefully long, gifting Radwanska a first set that, up to that point, had been anything but easy.

The second set started much like the first: Sharapova attacking – and nearly breaking – the Radwanska serve, but Radwanska holding on. But despite this familiar pattern, the differences between the two were becoming clear. Sharapova’s frustration at being unable to both break the Pole and, at times, get the ball in the court was palpable. Radwanska, meanwhile, remained typically calm throughout, manipulating both her opponent and the match.

It was paying dividends. With Radwanska’s serve growing in stature, the No.5 seed held to love before making her move at 5-4. Maria’s service game was brutal, with Radwanska forcing mistakes from the Russian to earn two championship points at 15-40.

She only needed one. As a backhand flew aptly long from Sharapova (her 45th unforced error of the match), the Pole claimed her first Miami crown.

“I played really well today,” Radwanska said. “I was really focusing on my serve, and I’m very happy I didn’t lose it. It was the key in this match.

“It’s a great feeling to beat those kind of players, especially in the final playing great tennis.

“It’s a great feeling to win a tournament like Miami. It’s the biggest tournament after the Grand Slams, especially with all the top players.”

For Sharapova, it’s back to the drawing board. This is her fourth loss in the finals of Miami, and her third loss in a final in 2012.

“It was just one of those days,” Sharapova said after the match. “I thought she played extremely well today, was very consistent, got that extra ball back and I made that extra mistake.”