As the first quarter of the tennis season concludes with the Sony Ericsson Open, we reflect on how Australia's top 100 stars have progressed so far in 2012. 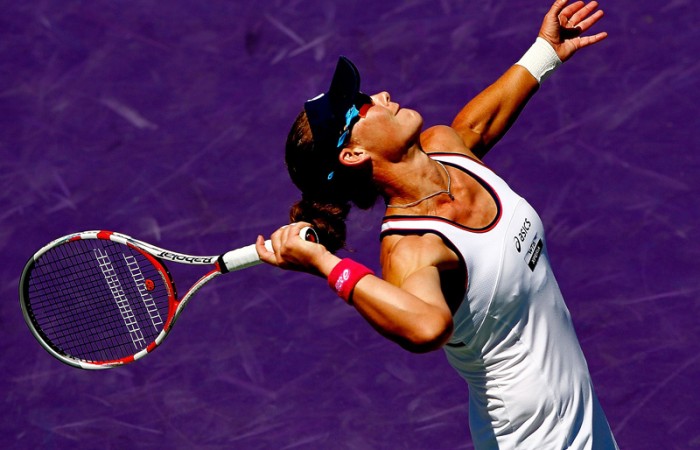 It doesn’t happen very often, but every now and again the ATP and WTA tennis tours take a few days off. Of course, there are always tournaments going on somewhere, but for a couple of days the top players can pause, catch their breath, and think about something other than their next match or destination.

The end of March/start of April is one of those times. Sure, Sam Stosur is off to Charleston to play on the clay ahead of the European season, while Bernard Tomic and Matthew Ebden are heading back to Australia for the Davis Cup, but this is considered mid-season down-time before the European swing begins.

So how have the Aussies in the top 100 faired in the first quarter of the year? We thought we’d review their form since their seasons kicked off on home turf.

If 2011 ended on an unparalleled high for Sam, 2012 has so far been much more about ups and downs. Well, more specifically a down followed by a steady up. It was a difficult Aussie summer for the current world No.5, falling in the second round of Brisbane (to Bensova), the first round of Sydney (to Schiavone) and most disappointingly the opening round of the Australian Open (to Cirstea).

After a straightforward destruction of the Swiss in the Fed Cup, Sam’s trip to the Middle East was wholly more fruitful. Admittedly, Dubai didn’t go as she had hoped (a quarterfinal loss to Jankovic), but in Doha she was most definitely on form. A defeat in the final to Vika Azarenka – who was en route to the second best season start to the season in WTA history – was a good return from a solid week in Doha.

Then came the States. If you only looked at the stats you’d say it wasn’t a great month for Sam. In reality, it wasn’t too bad. Yes, she lost to Petrova in the third round, but Nadia was just having one of those days. What’s more, after a shocking start Sam turned the match around to the point of almost winning (losing 7-6 in the third). It was a gutsy, resilient performance. And it carried over into Miami, where a 7-5 6-3 loss to Serena Williams in the fourth round belied the fact that Sam went toe-to-toe with the American in a match that turned on a few points, with the crowd enjoying some exceptional tennis.

All in all, the omens are good for Sam going into the claycourt season, one of her strongest surfaces.

This is the year. Every year Bernie grows in confidence, and his ability to push the best in the world – not to mention his ranking – follows. In 2012 Bernie has been dangerous, and there’s every indication that he should reach the midpoint of the year inside the top 30.

It all started in Brisbane, where wins against the always-tough Julien Benneteau and Denis Istomin set up a semifinal clash with Andy Murray. While the result didn’t go the right way for the Aussie, it set him up perfectly for the Aussie Open. And what a tournament for the young local!

Once again there were late nights. Once again there were dramatic wins. And once again Tomic (and his girlfriend at the time) dominated the press. Verdasco, Querrey, Dolgopolov – all big names and all big wins. In particular, Bernie’s epic 4-6 7-6(0) 7-6(6) 2-6 6-3 win over Dolgopolov in the third round stands out as a defining performance. It set up a clash with Roger Federer, and while a 4-6 2-6 2-6 loss might not have been the result we were looking for, it showed that Bernie was ready to mix it with the big boys.

Over to the States and if Memphis was tricky, Indian Wells was unfortunate as Bernie was hit by the airborne virus that took out so many of the players (not to mention staff and public). Then came Miami. Sergiy Stakhovsky is always dangerous but Bernie dispatched him pretty easily. However, David Ferrer is another matter. The world No.5 was a formidable opponent and Bernie went down 6-4 6-4 in an extremely tight match.

The signs, though, are all good. Bernie is playing well, he’s calm and focused, and he has a string of tournaments coming up where he has no points to defend. Unless he has an absolute shocker, his ranking will go up and he should be seeded for the French and/or Wimbledon. Stay tuned …

This year has not been too kind to Jarmila Gajdosova so far. But the signs are positive that it is going to turn around. What’s more, it started so positively, with a run to the quarterfinals in Hobart where she eventually lost to the increasingly-confident Mona Barthel.

Then things became tricky. A tough first round draw at Melbourne Park saw her go out 6-4 6-2 to Maria Kirilenko, and things didn’t get easier from there. While Jarka might not have been amassing ranking points, she was picking up plenty of airmails, visiting Paris, Doha and Kuala Lumpur in the space of a few short weeks. They were tough tournaments for Jarka, with first round exits in Europe and the Middle East, and a second-round defeat in Malaysia.

Then came Indian Wells. In the desert, Jarka found her form, beating the lower-ranked but always dangerous Coco Vandeweghe, before coming through in three against No.22 seed Yanina Wickmayer. A third round loss to Jamie Hampton was disappointing, but the American was in blistering form that week. Then came Miami. There was one unseeded player everyone wanted to avoid: Kim Clijsters. Jarka drew her and pushed her hard. A 4-6 6-1 6-0 loss disguised a second set that was much tighter than the scoreline suggests. All in all, things are definitely on the up for Jarka.

A first-round loss in Brisbane disguised what has been – so far – a solid year for Matt Ebden that his seen him hit a career-high ranking. What’s more, with the momentum behind him the signs are that things are only going to get better.

Leading into the Aussie Open, a three set win over Marcel Granollers in Sydney was followed by a tight loss to the always dangerous Marcos Baghdatis (how is his ranking as low as it is??). At Melbourne Park, Matt was again banging on the door of a breakthrough. Joao Souza offered little resistance to the Aussie who won in straight sets, before Matt lost in five to Kei Nishikori (6-3 6-1 4-6 1-6 1-6) who went on to have the tournament of his life.

As the Tour moved on to North America, Matt kept grinding out the results, consistently pushing and beating higher-ranked players. Then came Indian Wells. Straightforward wins in qualifying took him into the main draw and Matt found his stride. Kunitsyn and Benneteau were dispatched in three, before world No.8 Mardy Fish was taken down with apparent ease, by a scoreline of 6-3 6-4. A fourth round loss to John Isner was disappointing, but the big man was on his way to the finals of that tournament (defeating Novak Djokovic en route).

Coming off the back of Indian Wells, a three-set loss in Miami to Sam Querrey was disappointing, but also a sign of how far Matt has come. The confidence is there, the work ethic is there and Matt should be looking forward to a solid European season.

So close to a breakthrough, Anastasia has been working hard this year to find it. Australia was tough for the 29-year-old, where a loss in Brisbane qualifiers to Vania King (who was coming into a rich vein of form) was followed by defeat to compatriot Gajdosova and a first-round loss to then world No.1 Caroline Wozniacki at the Aussie Open.

But while the results have been frustrating, there have been some definite positives for Anastasia. In particular, victory against Tamira Paszek in qualifying at Dubai was a good scalp to collect. As we said, the signs are there and it’s surely only a matter of time before she starts coming through.