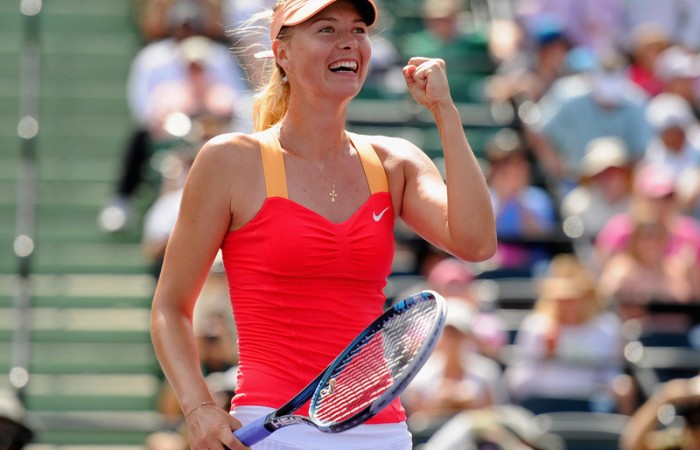 Maria Sharapova advanced to her fourth Miami final on Thursday after the world No.2 rallied to beat fourth seeded Dane Caroline Wozniacki 4-6 6-2 6-4 at the WTA/ATP hardcourt tournament.

She will next face Poland’s Agnieszka Radwanska, who beat Marion Bartoli in the late evening match on Thursday in straight sets, 6-4 6-2.

Sharapova, a three-time runner-up in Miami, is in her second consecutive tournament final after losing in straight sets to Victoria Azarenka at Indian Wells. She also reached the Australian Open final in January.

“I started out well and then I just had a concentration drop but I am happy I pulled it through,” Sharapova said.

The 24-year-old lost in the Miami final in 2005 to Kim Clijsters, 2006 to Svetlana Kuznetsova and last year to Azarenka.

Sharapova clinched the two hour, 34 minute match on the second match point but she needed the chair umpire to overrule a call on the second one after her serve was initially called long.

The chair umpire disagreed and overruled the initial call, saying it was on the line.

Wozniacki didn’t like it but the television video replay backed up the umpire.

Sharapova stepped up for her second serve then worked her way into position so she could eventually hit an easy forehand drive volley at the net for the winner.

Sharapova is now a perfect 4-0 in semifinals in Miami and beat Wozniacki after losing the last two meetings to her on hardcourts. She will be gunning for her 25th career title.

The 21-year-old Wozniacki dropped to 13-6 on the year but she equalled her best result of 2012 by making it to the semis. She also made the final four in Dubai.

Sharapova finished with no aces, five double faults but she won 68 per cent of her first-serve points.

Sharapova broke Wozniacki in the seventh game of the third set to make it 5-2. Trailing 30-40, Wozniacki attempted a forehand drop shot that landed just short giving Sharapova the break and allowing her to serve for the match.

But Wozniacki battled hard on defence in the next game, matching Sharapova’s powerful ground strokes to break right back.

Wozniacki then held serve when Sharapova hit a forehand long to cut the lead to 5-4.