Marion Bartoli has staged a major upset in Miami to snap Victoria Azarenka's 26-match winning streak, and will next face Agnieszka Radwanka. 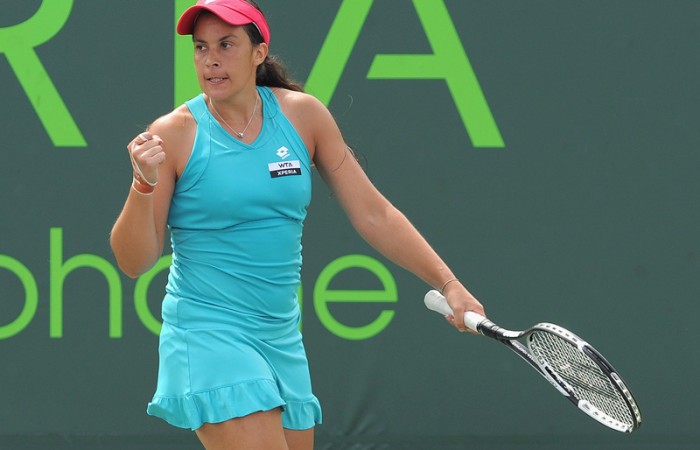 Marion Bartoli has staged a magnificent upset at the Sony Ericsson Open in Miami, halting world No.1 Victoria Azarenka’s 26-match unbeaten start to 2012 thanks to a 6-3 6-3 victory.

The seventh-seeded Frenchwoman completed the famous win in one hour and 37 minutes to move through to the semifinals of the combined WTA/ATP hardcourt event.

Bartoli capitalised on the Belorussian’s serving woes, with Azarenka producing five double faults (to no aces) and winning less than half of points behind her normally dependable first serve.

Azarenka may have been feeling the effects of her epic fourth-round clash against Dominika Cibulkova. The top seed was forced to recover from 6-1 4-0 down, eventually winning 1-6 7-6(7) 7-5 in almost three hours.

Bartoli, also a semifinalist in Miami back in 2010, will next face Agnieszka Radwanska for a place in the final.

Radwanska, ranked fourth in the world and seeded fifth, needed one hour and 21 minutes to overcome Williams, who was playing her first WTA tournament in more than six months after her abrupt withdrawal from the second round of the US Open.

It was during that tournament that Williams revealed she had been diagnosed with the auto-immune disorder Sjogren syndrome.

Williams, 31, is hoping to raise her world ranking high enough to allow her to compete at the London Olympics.

Currently 134th in the world, she is projected to move up to around 90th when the new rankings are released on Monday thanks to reaching the quarterfinals in Miami.

The top 56 in the world as of early June are eligible for direct entry into the Olympic tournament, which will be held at Wimbledon.

Radwanska benefitted from Williams’ apparent lethargy throughout the match, possibly the effects of the American’s torrid path through to the quarterfinals in Miami.

In her past three matches, Williams required three sets to get past No.3 seed Petra Kvitova, Canadian Aleksandra Wozniak, and Serbian star Ana Ivanovic.

Radwanska, who improved her impressive 2012 win-loss record to 24-4 – all those losses coming against Azarenka – will contest the semifinals at the Sony Ericsson Open for the first time in her career. Her previous best result was a quarterfinal finish in 2010 and 2011.

Interestingly, Williams defeated Radwanska in that 2010 quarterfinal, before going on to beat Bartoli in the semifinals.