Venus Williams' heartwarming run at the Sony Ericsson Open continues, with the American saving match point to beat Aleksandra Wozniak and reach the fourth round. 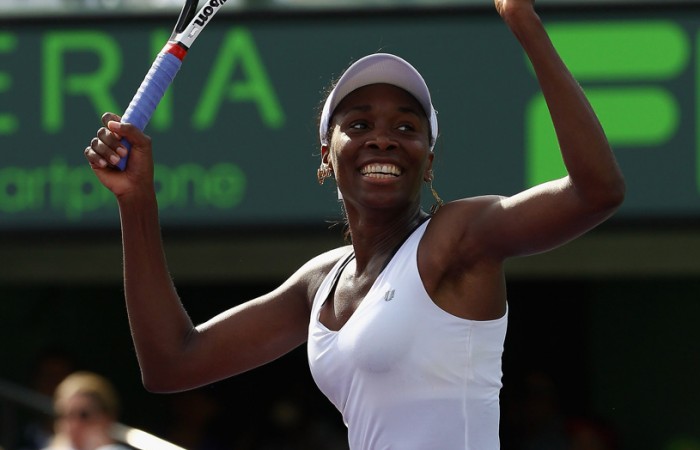 Former world No.1 Venus Williams saved a match point to outlast Aleksandra Wozniak 4-6 6-4 7-6(5) in the third round of the joint WTA and ATP tournament in Miami.

“I tried not to let anything discourage me today. I kept thinking about how I really need this match and I need these points.”

The seven-time grand slam winner is playing in her first tournament since withdrawing from the US Open last August after being diagnosed with a fatigue-causing autoimmune disease. The three-set victory on Sunday was her second in less than 48 hours, and took nearly three hours.

Wozniak served for the match at 5-4 in the final set, but dumped a forehand in the net when she had a match point. The tiebreaker swung Williams’s way when she smacked an overhead that clipped the net cord before landing softly for a winner and a 4-2 lead.

Her final shot was a 119-mph service winner.

Williams is ranked No.134 in the world and needed a wild card to enter the tournament and is trying to improve her ranking enough in the coming weeks to qualify for the London Olympics.

On a sweltering spring afternoon, Williams looked lethargic at the outset, struggled with an erratic forehand and kept falling behind.

But Williams managed to pull even after two sets, then fell behind 4-2 in the third set and looked increasingly weary. During one changeover she hung her head for 15 seconds before slowly lifting it to take sips from two drink bottles.

Wozniak looked fresher but couldn’t serve out the match. Instead, she hit consecutive nervous double-faults and committed unforced errors on the game’s final three points, which made it 5-all.