Venus Williams scored the most significant win of her comeback over Wimbledon champ Petra Kvitova in Miami, while Victoria Azarenka took her winning streak to 24. 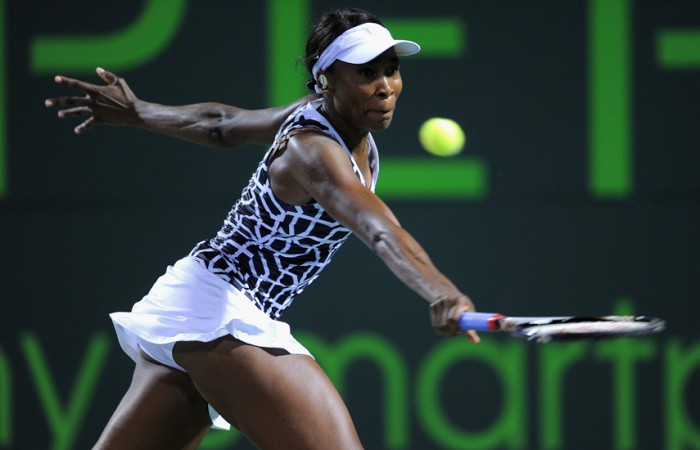 Former world No.1 Venus Williams, idled for six months, upset Czech third seed Petra Kvitova 6-4 4-6 6-0 on Friday to reach the third round of the $US9.6 million ($A9.27 million) WTA and ATP Miami hardcourt event.

Seven-time grand slam champion Williams, in her first WTA event since pulling out of last year’s US Open, took advantage on 9-of-11 break-point chances and fought off a rally by the reigning Wimbledon champion to advance after two hours and 18 minutes.

At last year’s US Open, Williams withdrew after a first-round triumph and revealed she had been diagnosed with the auto-immune disorder Sjogren syndrome, an illness that saps her energy and causes pain in her joints.

She played doubles for the US Fed Cup team last month and defeated Japan’s Kimiko Date-Krumm 6-0 6-3 in her WTA return match on Wednesday in round one.

Top-ranked Victoria Azarenka extended her winning streak to 24 matches with a 6-3 7-5 victory over Michaella Krajicek in the second round at the Sony Ericsson Open.

Azarenka’s streak began with her first match this year and her start is the best since Martina Hingis went 37-0 to begin 1997.

Azarenka is bidding for her third Miami title and second in a row.

She double-faulted six times and lost three service games, but Krajicek was even more erratic with her serve. The Dutchwoman failed to hold at 5-4 in the second set, double-faulting three times, and Azarenka swept the final 10 points.

The Belarusian is seeking her fifth title this year, and comes off her fourth at last week’s Indian Wells event, where she beat world No.2 Maria Sharapova of Russia in the final just as she did last year in Miami.