Blogging from the Sony Ericsson Open, Paul Moore discusses Federer's form, the resurgence of women's tennis, and the buzzing atmosphere in glittering Miami. 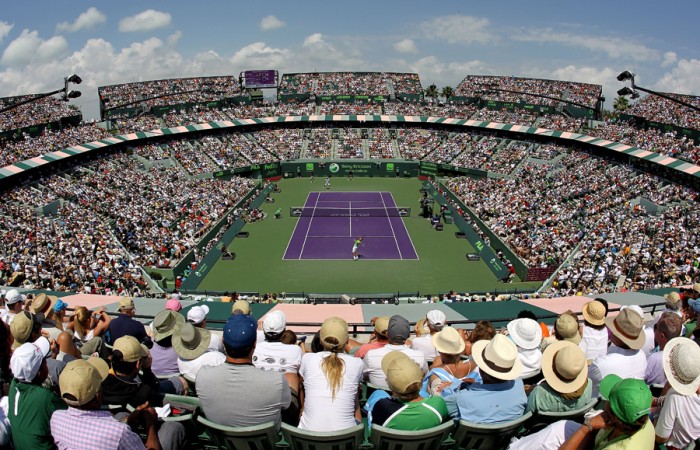 According to a drunk man sitting on a bus at 10.00am, 150,000 people are expected to descend on Miami this weekend. Hyperbole aside, the city is packed. Of course, the Sony Ericsson Open has attracted a huge chunk of these spectators. The other huge chunk has been lured by the Ultra Music Festival – a massive dance music event that takes place in the heart of the city. Aside from the logistical complications of having 150,000 people in a city designed to accommodate 8,000 (figures sourced from the drunk man), that gives a certain buzz to the place.

Inebriated teens wearing next-to-nothing are merrily mingling with a tennis crowd who generally prefer to don a little bit more (although not always – this is Miami), and the residents of the city are clearly trying to figure out which camp they fall into. Of course, it’s possible to straddle both (and a few of the players and tournament crowd are attempting to do just that), but for the most part the clientele at both events are a little different. But both are buzzing.

In particular, at the Sony Ericsson Open there is the kind of buzz that we haven’t seen for a while. Why? Well, one reason is the supposed resurgence of Roger Federer. Admittedly, ‘resurgence’ is a bit of an understatement for a man who plumbed the depths of number four in the world for a few brief weeks during a – by his lofty standards – difficult year, and is currently sitting on a 15-match winning streak.

But while so often at these combined tournaments the lion’s share of the attention focuses on the apparently inevitable progression of the “Big Four” in the men’s game to the semis, this time the women are grabbing their fair share of the spotlight in Miami. Serena, Venus, Kim, Maria, Ana… aside from the absence of Justine it reads like a who’s who of women’s tennis from the best part of the last decade. What’s more, they’re all playing well. Of course, without a lot of match practise behind them Kim and Serena in particular are yet to get into their formidable stride, but they aren’t here to make up the numbers.

And that raises some interesting questions, not least for the “new” guard of Vika, Petra, Caroline and Aga. Vika, the Aussie Open champion, is now sitting astride a 24-0 record in 2012, while Petra is already gone, falling to comeback-queen Venus on Friday night in three sets.

But on the other side, Sam Stosur has landed herself a shocking path to the final. Sam faces a possible fourth round re-run of last year’s US Open final against Serena. On the other side of her quarter, Caroline – not in the form of her life at the moment – has a potential fourth round tussle with Kim. And the winners of both those matches square-up in the last eight. Whoever wins that should, on both paper and current form, face Maria.

Ah, Maria. The misnomer in this equation. Because despite Ana resurfacing over the past few months, Sharapova remains the one player who was capable of dominating when Kim, Serena, Venus and Justine were on top of the world, and is still doing so today.

The whole situation is fascinating. And the results of this tournament more than any other this year will speak volumes about both the quality and progression of women’s tennis over the past few years. In particular, should Serena or Kim – both lacking significant match practise and most probably in the latter stages of their respective careers – win this thing, then questions will surely be asked about the quality of the players currently sitting on top of the world. If, however, Vika, Maria or Caroline can blow the old guard away, then surely those questions will be answered. Fascinating.

In the meantime, we’re going to sit back and enjoy the show. Not the sweaty dance music festival show (that’s sold out unfortunately), or the show the drunk man on the bus put on for us, but the show that is going to unfold out here on Key Biscayne. It should be, quite simply, electric.