Matthew Ebden has lost in heartbreaking circumstances in his opening match in Miami against Sam Querrey, going down 7-5 in the third set to the American. 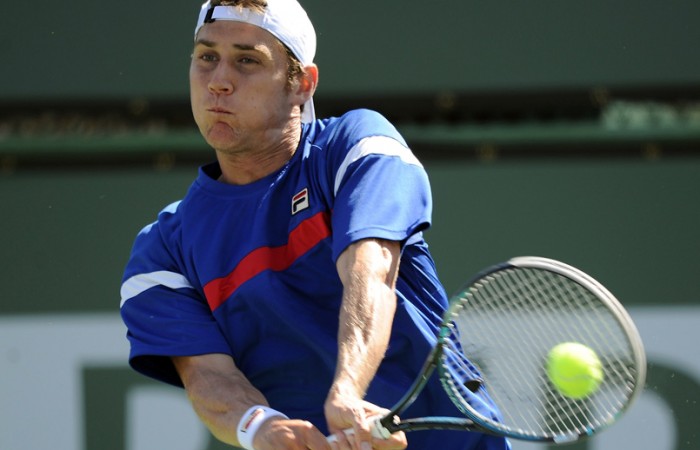 Coming into the Sony Ericsson Open, the signs were promising for Matt Ebden. A career-high ranking of No.78 came off the back of a fantastic run in Indian Wells and some good early season results. What’s more, his first round opponent, Sam Querrey, was a man that, on recent form, Matt would be expected to beat.

Unfortunately, against an American whose ranking does no justice to his talent, Ebden was out-scrapped 6-1 5-7 7-5 on a cool Centre Court at the Sony Ericsson Open.

It was a match that had started so brightly for the Aussie No.2. In the opening exchanges Ebden pushed Querrey on his serve and held easily.

But then something changed. Querrey’s serve – rarely below 125mph – found its range. That gave the big American the confidence to hit out at his groundstrokes, pushing the Aussie all over the court.

It was too much for Ebden to handle. In no time at all, 2-1 became 5-1, and shortly after Querrey had served out the set in just 24 minutes.

Still, there was time. Ebden has been down before and fought his way back into things. And throughout the second set, he indeed fought. Admittedly, he still struggled to contain the Querrey serve, but there was decidedly more confidence about his own service game.

It was a fascinating encounter played at a lightning-quick pace by two players who can move brilliantly around the court. But just as it looked like the pair were heading for a tiebreak, Ebden struck.

When a phone disrupted Querrey on his serve, the Australian sensed his chance. The next point threw up the opportunity for a break, and despite Querrey saving one he couldn’t manage a second. Ebden took the set to level the match.

The third set picked up where the second left off: a tight scrap. Both players were playing aggressive tennis, and both had the chance to score the break.

Querrey struck first. At 4-4 and with nothing to separate them, Ebden ran into trouble. Querrey raced to 0-40 and when the American put his return at Ebden’s feet the Aussie had no answer.

Although it was a tame break to concede, Ebden is a fighter, and he hit back immediately, breaking back to love to level the final set at 5-5.

At 5-5 40-15 things looked to be going in the right direction for the Western Australian, but a few loose points allowed Querrey to come back to deuce. A double fault followed by a netted forehand by Ebden meant the American was serving for the match for the second time.

And this time he wasn’t going to miss his chance. Firing down some massive serves Querrey raced to a 40-0 lead, before sealing the win with a huge forehand.

It was a disappointing end for Ebden in a match that could have gone either way. For Querrey, a second-round battle against Kevin Anderson awaits.