Despite a promising start, Jarmila Gajdosova could not prevent four-time major winner Kim Clijsters from steamrolling through their first round match in Miami. 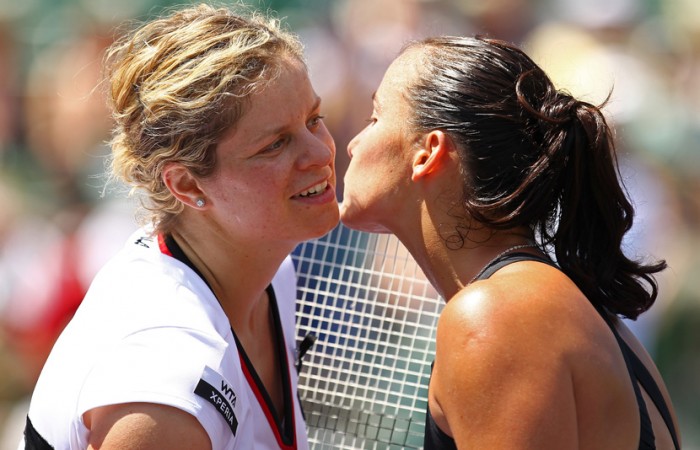 She might not have played too many matches this year, but as Jarka Gajdosova reflected after her 4-6 6-1 6-0 first round loss to Kim Clijsters, “Kim is Kim.”

The unseeded four-time Grand Slam winner, appearing in her first competitive match since her semifinal loss to Victoria Azarenka at the Australian Open, started out shakily but finished in style during a topsy-turvy encounter at the Sony Ericsson Open in Miami.

In the first set Clijsters’ lack of match play showed. The early exchanges were scrappy, with both players struggling to find their range on a warm, windy Centre Court.

When Clijsters broke at 2-2 it looked like she might push on, but Gajdosova fought back straight away, bringing the match back on serve. Again, both players struggled with their range but Clijsters was the next to crack, with the Australian breaking before serving out the set.

At the start of the second, it looked like Gajdosova would keep the pressure on. Racing to 15-40 on Clijsters’ serve, she pushed hard to secure another break.

Then something changed. An unforced error and a solid serve brought it back to deuce, and Clijsters went on to hold. Then she broke.

In fact, the next four games unravelled pretty quickly for the Aussie. They weren’t as one-sided as the second-set 6-1 scoreline suggested, but Clijsters’ game picked up a gear. The Belgian started to find her range while Gajdosova just couldn’t take the chances on her own serve or convert her break points.

To her credit, though, Gajdosova kept on swinging, and at 5-1 down she played a string of incredible returns to bring the game back to deuce. However, Clijsters was again able to take it up a notch, taking the set to level the match.

Going into the third, the signs were there that the Aussie No.2 could still snatch the win.

Yet it wasn’t to be. Immediately Clijsters stepped up a gear, pulling out the kind of tennis that has secured her four Grand Slam titles. It was exhibition stuff at times, and Gajdosova simply didn’t have an answer to it.

Clijsters completed a brutal final set with a big serve to take the bagel.

“The first set was pretty good,” Gajdosova said after the match.

“I got broken early in the first set but then I broke back and I thought I played pretty well. Kim helped me a little bit – you could see that she hasn’t played a match for a little while.

“In the second I felt I did pretty well and I had a lot of break and game points but couldn’t finish the games and it went away from me and Kim started playing her old game.

“Once Kim is on it’s hard to stop her. I’ve never played her before so I never knew what was going to come at me. I knew it was going to be tough either way – she’s not just going to stop playing. She’s a great player and in the end I’m glad I got to play her – I wish I could play her again.”

Gajdosova said that there were positives to take away from the match.

“I haven’t been playing very well – it’s been a struggle since last year when I got sick and injured. It’s taken a little while to get better and start playing better so that was a positive,” she said.

“It’s a pretty tough first round – Kim hasn’t played but Kim is Kim and it’s one of those that just because she hasn’t played you’re going to win. It was great to play her and I thought I did pretty well. I just wish I had played better than I did.”