Although he came close, Matthew Ebden was unable to take down a second high-profile American player at Indian Wells, falling to No.11 seed John Isner. 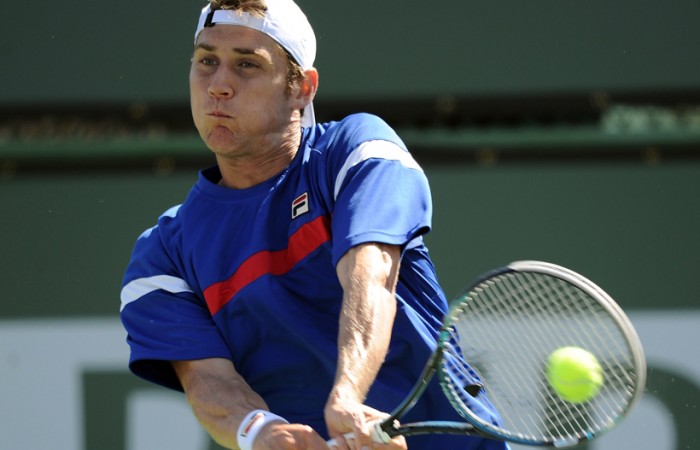 Matthew Ebden has gone down in the fourth round at the BNP Paribas Open in Indian Wells, bundled out 6-4 7-5 by American No.11 seed John Isner.

Ebden, who was bidding to win his sixth consecutive match in the Californian desert after beginning the tournament in the qualifying draw, put up a good fight but was unable to make inroads on the 206-centimetre Isner’s serve, falling in just under one-and-a-quarter hours.

Isner will face Gilles Simon in the quarterfinals, who upended the other remaining American in the draw, Ryan Harrison, 7-6(0) 5-7 6-1.

The Australian gave credit to his conqueror, admitting that Isner was just too good on the day.

“You can’t win every match unfortunately. John played some great tennis today and I didn’t have many opportunities, created a couple for myself and he came up with some big play. There was probably only a few points in the match and I’ll just look to get better and improve,” Ebden said.

Isner, known for his monstrous delivery, showed the crowd on Stadium 2 why this is the case, slamming 10 aces, winning almost 90 per cent of points on his first serve, and saving both of the measly two break points he faced.

Ebden was by no means disgraced on serve, however, landing 70 per cent of his own first serves, including six aces. Each set was decided by just one break of serve.

The Western Australian said he tried a variety of tactics to pick up Isner’s serve and hurt the American with his return, but to no avail.

“The bottom line is that you’ve got to somehow get you racquet on it and hit the ball back into his side of the court. I felt like in the rallies I was comfortable. The problem was I wasn’t able to get enough serves back,” he reflected.

“He played maybe a few good points and I played a few loose points on my serve and that cost me the match.”

Ebden’s run to the last 16 at Indian Wells is expected to vault him near – or possibly even above – his career high ranking of No.79, achieved in October 2011.

He will head to next week’s ATP Masters event in Miami with direct entry into the main draw, and said that his body had recovered well following all his tennis at Indian Wells and that he was brimming with confidence.

“It’s exciting and it’s a development road for me. I’ve beaten a lot of good players in a row and lost by a few points today. I think it’s very positive. We know where my game is at and we know where I’m heading. I’m moving to the top in the world rankings if I can work hard and keep improving and keep playing good ball,” he said.

“I think it’s an experience winning a bunch of matches again in another Masters (event). To come out here in America and beat a lot of good players again is very positive. Miami, another Masters next week, is another great opportunity and I’ll be working on some things that I could have maybe improved on today.”

The Sony Ericsson Open at Crandon Park in Miami will kick off on 21 March.