Aussie qualifier Matthew Ebden has hailed his defeat of Mardy Fish as the biggest of his career after beating the world No.8 in straight sets at Indian Wells. 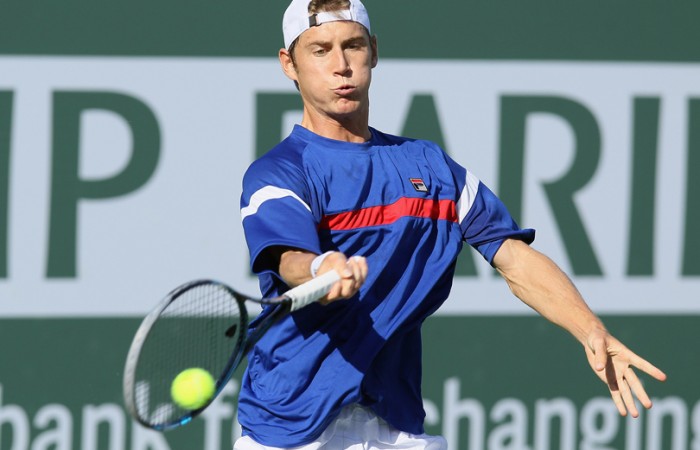 World No.91 Matthew Ebden has recorded a career-best result in Indian Wells on Monday, defeating local and No.8 seed Mardy Fish in straight sets to progress to the fourth round.

The Australian qualifier handed the out-of-form American his fourth loss from eight matches in 2012, winning 6-3 6-4 in one hour and 25 minutes.

Normally one of the premier servers in the men’s game, Fish was hurt by five double faults – compared to just two aces – throughout the contest.

Ebden said that on paper, the win represented the best of his burgeoning career.

“I beat (Gilles) Simon last year (in Shanghai) and he was 10. I think Mardy is about eight. And to beat him in America it’s an incredible feeling and a very big win,” he said.

“I’m pleased with my progress. I’ve got another big American in the next round. I’m just loving what I’m doing round here, I’m loving competing hard and taking opportunities so I’m looking forward to the next one.”

That final 16 bout will come against 11th seed John Isner, who moved through his third round match following a testing encounter against No.22 seed Juan Monaco of Argentina.

Ebden has now won five consectutive matches at the combined ATP/WTA event in the Californian desert, coming through two rounds of qualifying before winning his first and second round matches in three sets.

The Australian said his focus would simply be on going through his recovery routine before taking on Isner in one of the biggest matches of his career.

“John is obviously one of the best servers in the world so I need to return well and focus on my service game to keep him under as much pressure as I can,” Ebden explained.

“About two years ago I started having some good wins against good players and as I said a few days ago it’s about playing more consistently and raising my level to a solid level every time. Being a tough competitor and bringing the best I can each time. It’s starting to show well for me on the scoreboard and if I can keep them ticking over I’ll be happy.

“I’m working hard to improve my game and become a better player each day.”

If the Americans think Ebden has it in for their countrymen – he beat American Rajeev Ram in qualifying before his defeat of US No.1 Fish – they can rest assured that’s not the case, with the Australian pairing with young American Ryan Harrison in the doubles event.

Harrison joined Ebden in the fourth round of the singles draw following a straight-set defeat of Spaniard Guillermo Garcia-Lopez late on Monday night.

“Me and Ryan are really good friends – we’ve become close in the last year or so – sort of like brothers out there,” Ebden said.

“We’re playing doubles together and we had a lot of fun playing out on Centre Court. I hope the Americans and Australians get on well. We’re both English speaking and try to take on the Europeans. If we can remain friends and help each other along then it’s good fun.”

The pair take on Polish duo Mariusz Fyrstenberg and Marcin Matkowski in a second round match on Tuesday while enjoying a day off from singles play.