Casey Dellacqua and Anastasia Rodionova stand just one win away from a place in the Indian Wells main draw after winning their first round qualifying matches. 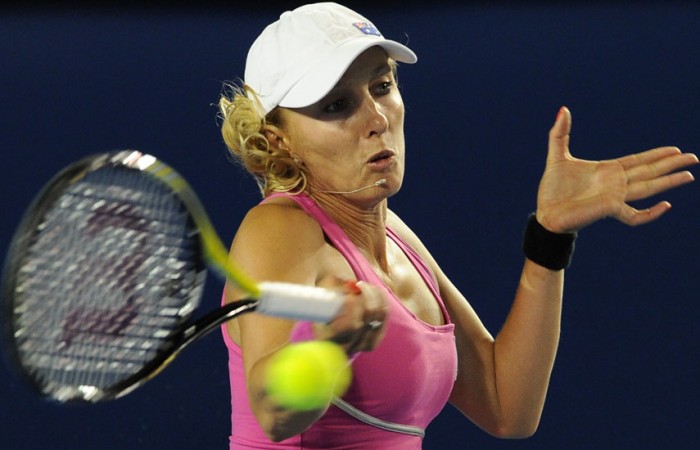 Australians Casey Dellacqua and Anastasia Rodionova stand just one win away from a place in the main draw at the BNP Paribas Open at Indian Wells, with both winning their first-round qualifying matches on Monday.

World No.103 Dellacqua, who is poised to re-enter the top 100 for the first time since early 2009 if she enjoys a good run in California, came through a potentially tricky match against prodigious young Brit Laura Robson.

In a battle of left-handers, Dellacqua made sure she never let the powerful Robson get into her groove, sweeping aside the 18-year-old 6-3 6-1 in just 54 minutes.

It sets up a final-round qualifying battle against Japan’s Misaki Doi, who defeated Georgian Anna Tatishvili 6-3 6-4.

Dellacqua, the 20th seed in qualifying, reached the fourth round at Indian Wells in 2008.

Rodionova also progressed in straight sets, coming through a tight second set to wrap up a 6-2 7-5 win in one hour and 14 minutes over Russian Evgeniya Rodina.

Her next opponent will be No.6 seed Aleksandra Wozniak, who defeated another Brit in Heather Watson, 6-4, 6-4.

Fellow Aussie Olivia Rogowska was not so lucky, going down in straight sets to American Varvara Lepchenko.

Despite having recorded her career-best WTA result last week with a run to the quarterfinals at the Malaysian Open in Kuala Lumpur, Rogowska was not able to maintain her form, falling to the ninth-seeded Lepchenko 6-1 6-3 in just over an hour.

The women’s main draw – which kicks off on Wednesday – was released yesterday and has dished up some challenging assignments for Australia’s women.

Sam Stosur, the No.6 seed, receives a bye into the second round before a clash with either American wildcard Irina Falconi or Romania’s Alexandra Dulgheru.

No.30 seed Nadia Petrova looms as a third round opponent, before a projected fourth-round clash with either Maria Kirilenko – who has won the pair’s last two matches – or big-hitting 11th seed Sabine Lisicki of Germany.

Aussie No.2 Jarmila Gajdosova opens against another American wildcard in Coco Vandeweghe, and if she wins she’ll face No.22 seed Yanina Wickmayer, her conqueror in the first round at Australian Open 2011.

Jelena Dokic faces dangerous Argentine Gisela Dulko first up, with the winner dealt the intimidating prospect of a second round match against world No.2 and Australian Open finalist Maria Sharapova.

The men’s qualifying and main draws are expected to become available later today.