Marinko Matosevic has reached the first ATP final of his career thanks to a tense three-set semifinal win over Israeli Dudi Sela at Delray Beach. 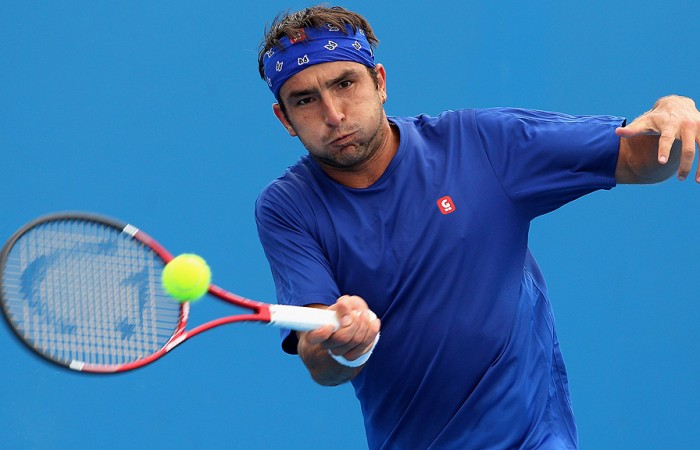 Australian tennis battler Marinko Matosevic had it all to play for after reaching his maiden ATP Tour final in Florida.

Matosevic admitted he was exhausted after holding his nerve to progress to Monday’s title match with a tense 5-7 6-4 7-6(7) semifinal victory over Dudi Sela at the Delray Beach International.

The match lasted six minutes shy of three hours, but the rewards for his seventh win of the week were plentiful with Matosevic eyeing the biggest pay cheque of his career and a huge rankings rise.

Matosevic was guaranteed at least $US39,000 ($A36,250) and probably a career-high leap into the world’s top 130 even if he lost to big-serving South African Kevin Anderson.

With victory over Anderson, Matosevic would surge to the cusp of the top 100 – generally the cut-off mark for direct entry into the grand slam events.

Matosevic earned every cent of his win on Sunday, regaining his composure in the third-set tiebreak after blowing three match points.

After wasting those two chances, he led 3-0 in the tiebreak but fell behind before double-faulting on his third match point and missing a fourth on Sela’s serve.

He finally prevailed on his fifth match point.

“I was just fighting off cramps (in hamstrings),” Matosevic said.

“I was fighting hard and never giving up. It was such a roller coaster out there. It was just up and down. Ill just try to recover the best I can.”

Matosevic could become the second qualifier to win an ATP World Tour tournament this season after Jarkko Nieminen qualified and triumphed in Sydney in January.

Before this week, Matosevic had not won a tour-level match this season and was just three-from-18 in his career.

“Marinko came all the way through qualifying, so he’s obviously playing well,” said the seventh seed.

“He likes the courts, the conditions. I’m just happy to get through today. For me, it will be about playing my game and enjoying the final.”