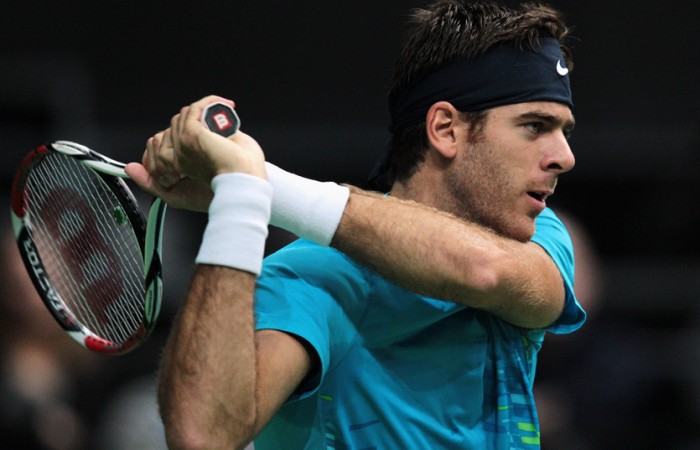 Second seed Berdych advanced with only minimal effort as opponent Marcos Baghdatis quit with a left foot injury after 19 minutes on court while trailing 3-0 in their second round match.

But Del Potro, the No.3 seed making his debut here, had a battle on his hands before he finally got past Slovak Karol Beck 6-4 7-5.

On Wednesday, Federer moved easily into the last eight at the Ahoy stadium when scheduled second round opponent Mikhail Youzhny withdrew a day before their contest with a left foot injury.

Federer still had to go out and win his opening match against Frenchman Nicolas Mahut, which he did, 6-4 6-4.

Del Potro had to overcome a slight bloody nose which required a medical timeout early in the contest with Beck.

Once that was sorted, it was back to work for the 2009 US Open champion, who advanced with nine aces – his last one earning two match points.

“He played so fast and hits with such a low bounce, I really had to keep up,” said Del Potro of Beck. “It was tough.

“But I focused in the last game on trying to get an ace. I got one and I’m just glad that I’m through.”

The 16th-ranked Gasquet improved his record to seven wins this season to next face Russian Nikolay Davydenko.

The Frenchman, with six career titles, went through to victory in just over an hour-and-a-quarter with four aces and four breaks of the Bogomolov serve.

“I’m happy to win in two sets and get into the quarters,” said the winner, who lost in his first Rotterdam appearance in the 2009 first round.

“I didn’t know how he plays, but I’m in good shape with my game and hoping to go further – why not win the next round?”

His quarter-final with Davydenko is a repeat of the match he won this month in Montpellier, taking his record over the veteran Russian to four wins in five encounters.