Bernard Tomic might be the torch bearer for now, but he could have some company in the near future as a crop of fellow teenagers offers some hope for Australian men's tennis. 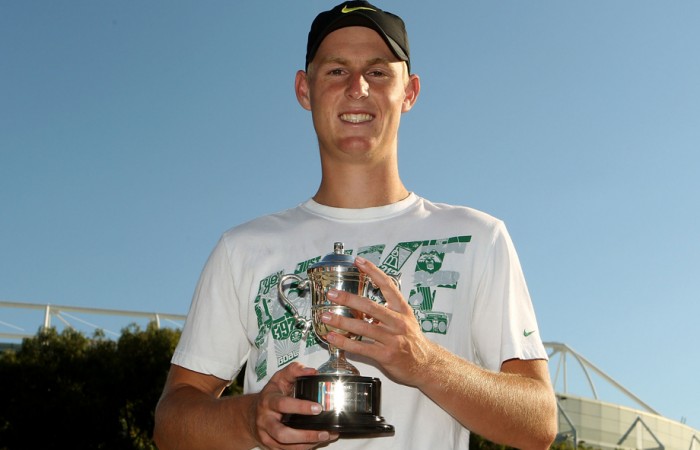 Bernard Tomic might be the torch bearer for now, but he could have some company in the near future as a crop of fellow teenagers offers some hope for Australian men’s tennis.

While 19-year-old Tomic is an established player on the men’s circuit, Luke Saville won his second junior grand slam title when he added the Australian Open on Saturday to last year’s Wimbledon title.

James Duckworth won his first-round match and took a set off world No.9 Janko Tipsarevic in the second, while Ben Mitchell pushed No.16 John Isner to three tight sets in the opening round.

Saville turns 18 on Wednesday and is aiming for more junior grand slams this year and possibly a wildcard into Wimbledon’s main draw, but knows he has a lot of work ahead of him to lift his ranking from its current 1177.

Tipsarevic said Duckworth would be much better than top 100 and the 19-year-old from Sydney is already heading in that direction, having leapt nearly 500 ranking places in a year to No.250.

And Mitchell, also 19 and with Duckworth in coach Brent Larkham’s stable at the AIS in Canberra, has jumped almost 400 places in the past 12 months to No.222.

Saville believes there is significant momentum in the youth of Australian tennis to make an impact in the not too distant future.

“Bernard is probably out of that range. He’s top 30 in the world now. He’s pretty much made it,” Saville said.

“But James, Ben, myself – there’s a lot of good players.

“I think we’ve got a good atmosphere and a good environment in Australian junior tennis at the moment and guys kind of breaking out of the juniors.

“I think that the AIS are doing great things. We’re all doing great at the moment and getting great results. We have no intentions of stopping here.”

But winning a junior grand slam is by no means an entree to senior success.

Although names like Federer, McEnroe, Lendl, Edberg and Borg are engraved on the junior trophies, many other winners have faded into obscurity.

Australians Ben Elwood and Brydan Klein did not develop after their Australian Open junior titles in 1994 and 2007 respectively, while injuries ruined Todd Reid’s career after winning the Wimbledon juniors in 2002.

Mark Kratzmann won the Australian Open boys’ title in 1982 and then, two years later, claimed the junior Australian, Wimbledon and US titles and was runner-up at the French.

But Kratzmann’s senior career rose no higher than a ranking of 50 and no ATP tour singles titles.

Tomic, the Australian junior champion of 2008 and US Open winner a year later, is on the way to converting his junior success and leading the teenage charge.