Australia's best-performed players in the Australian Open, Bernard Tomic and Lleyton Hewitt, have been named in the nation's Davis Cup team to play China in February. 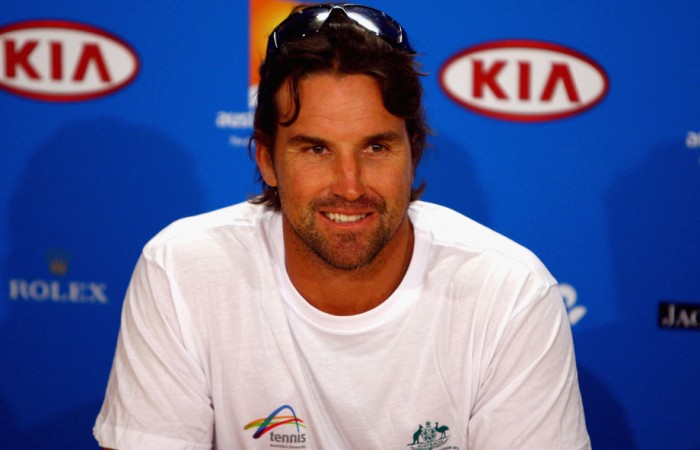 Bernard Tomic, Lleyton Hewitt, Matt Ebden and Chris Guccione will represent Australia in its upcoming Asia/Oceania Group I first round Davis Cup tie against China on grass at Geelong.

Rafter said with a smile that the selection process was an enjoyable one, and that the team members had “picked themselves”. He added that great performances at Australian Open 2012 had been a massive confidence boost ahead of the tie.

“(Coming in to) this tie I feel like they’ve had the tennis. It will be a couple of intensive days, and then we’ll take it very lightly. To me they’ve had all the tennis, they’ve got the confidence, and now it’s trying to get them in a good head space,” Rafter said.

“I think (the Australian Open has) been great obviously for Bernard, to see the way he deals with pressure, how he handles the big stage. He’s very, very comfortable out there. With Matt Ebden, (it) just gave him that little bit of confidence to know he can win in Grand Slams and he’s not far away.”

Rafter also had glowing praise for Hewitt, saying that his run to the fourth round at Melbourne Park had been a revelation.

“Those last couple sets (he played) against Djokovic were amazing. It just took me back to those days when he was playing great tennis. He moved really well. You know, I thought he lost a step over the last couple years, but he seemed to find it,” he said.

“I thought he was going to struggle physically. He didn’t. In terms of his heart and can he last those matches, and he had tough matches, he just surprised me everywhere.

“His whole game seemed to be back to where it was. It was really exciting to see. I was really proud of him.”

Although the team has been selected, the players who gain the singles berths and the eventual doubles combination will not be decided until closer to the tie, beginning 10 February at the Geelong Lawn Tennis Club.

A lot depends on the health of Hewitt’s toe. Rafter said that he had several options up his sleeve heading into the tie.

“Our strongest (doubles) team at this stage is Lleyton and Gooch. They’re the ones that have played the last couple times and performed really well,” he said.

“We’ll have to wait and see again how it unfolds. Also Matty Ebden is our next doubles player. Whether he and Gooch might play, that’s a possibility as well. I don’t even know until we name it.”

Australia last played China in the 2011 Asia/Oceania Group I semifinal in Beijing in July, winning the tie 3-1.

The last time Australia played in the elite 16-nation World Group was in 2007, losing a first-round tie to Belgium. In its World Group Play-off tie against Serbia later that same year, a 1-4 loss relegated Australia to Asia/Oceania Group I.

To return to the World Group, Australia must win its Asia/Oceania Group I first round tie against China and then a semifinal against either Korea or Chinese Taipei in April to progress to a World Group Play-off tie, scheduled for September 2012.