Australia has lost its last hope in the women's singles at the Australian Open, with Jelena Dokic bundled out by France's Marion Bartoli in their second round match on Thursday night. Earlier in the day, Matt Ebden lost a heartbreaker, leading two-sets-to-love against 24th seed Kei Nishikori before bowing out 1-6, 3-6, 6-4, 6-1, 6-1. As… 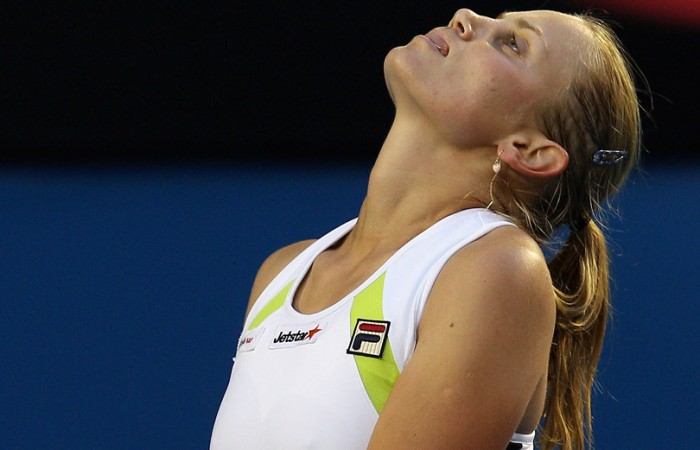 Australia has lost its last hope in the women’s singles at the Australian Open, with Jelena Dokic bundled out by France’s Marion Bartoli in their second round match on Thursday night.

As Dokic exited, she made it clear just how far she’s come.

There were no histrionics. No tears. No obvious fragility as she answered questions after an emphatic straight sets defeat by French ninth seed Marion Bartoli in their second round clash.

Even as her first serve deserted her, double-faults and unforced errors flowed, Dokic maintained both her new-found calm and philosophical approach after a 6-3 6-2 defeat which could have reduced her to a post-match wreck in previous years.

“You have to move on.

“It’s done. You look forward to tomorrow and every day you keep trying to improve something and get better.

Dokic, the last Australian remaining in the women’s singles, had no real answers to the clinical Bartoli at any point of their one hour, 12 minute contest.

Bartoli managed a late first set break, then backed it up with a break in the first game of the second set to eventually beat the 28-year-old, who had posted an impressive first round win over Russian Anna Chakvetadze.

But Dokic struggled with nine double-faults for the match – many on critical points and most in a poor first set – as well as 28 unforced errors.

Bartoli eventually took a stranglehold on the match by breaking the Australian’s serve again in the seventh game of the second set, allowing her the luxury of serving out the match in the next game.

It is the first time in more than a decade that Australia has not had a player advance to at least the third round of the women’s singles at Melbourne Park.

That’s not a statistic world No.64 Dokic can be blamed for, and if she was feeling any sense of let-down at being the Australian charged with turning out the lights, it wasn’t evident.

Dokic clearly believes she is on her way to better things in 2012, with new coach Louise Pleming having obvious impact on her mental game as the physical one remains a work-in-progress.

“I’m happy with the improvement I’m making,” she said.

“It’s never easy to take a loss, but I’m looking forward to whatever’s next.”

Ebden, who’d won his first ever Grand Slam main draw match in the opening round, faded as the match wore on.

Earlier, the Western Australian had coasted to a two-set lead on the back of solid play while his Japanese opponent committed a bundle of unforced errors.

But after receiving a medical time-out for a right leg complaint and then later to treat blisters on his foot, Nishikori lifted his standard of play, beginning to find the range on his damanging forehand and benefitting from Ebden’s increasing error tally.