Wildcard James Duckworth has made a successful Grand Slam debut, belting Jurgen Zopp from Estonia in the opening round of the Australian Open. 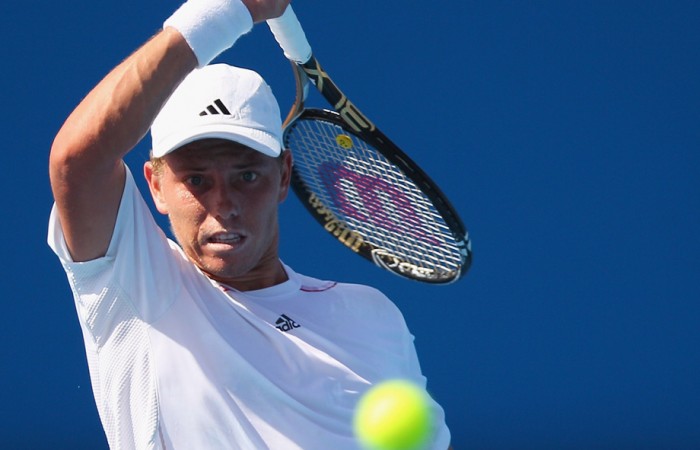 Wildcard James Duckworth has made a successful Grand Slam debut, belting Jurgen Zopp from Estonia in the opening round of the Australian Open.

Zopp won his way through qualifying and into the main draw, but he was no match for the young Australian on Tuesday.

Presumably Duckworth and Zopp were both pretty happy when they had a look at their opening-round draw. Remarkably, both were making their grand slam debuts.

But it was Duckworth – the grandson of 1955 Australian Open women’s singles champion Beryl Penrose – who coasted to victory on Showcourt Three.

“I was pretty nervous walking out because there were lots of people out there and it was my first grand slam match,” said Duckworth.

“But I managed to hide my feelings quite well and I’m really happy with the win.”

Zopp’s pro career to date has yet to scale the heights, but Duckworth still did his homework.

“I thought I was in with a good chance,” he said.

“I’d seen Jurgen play a few times before up in Brisbane.

“I thought if I went out there and was able to look after my own serve, I’d get chances and I was able to just take them.”

Duckworth’s next challenge looms as a much tougher one against Serbian No.9 seed Janko Tipsarevic, who won a tough four-setter in the opening round against Russian Dmitry Tursunov.

For Duckworth it was the biggest moment of his fledgling career.

“I’ve always dreamt about playing the Australian Open in front of my home fans and my family and friends,” he said.

He became the second Australian man to advance to the second round at Melbourne Park along with Bernard Tomic.

Unfortunately, fellow Australian Marinko Matosevic fell at the opening hurdle. But he was still competitive before going down 7-6 (7-5) 6-3 6-3 to to mercurial No.14 seed Gael Monfils from France.